The 4th Congress Paisatge, Turisme i Innovació showcases the territorial heritage as a key element for touristic development 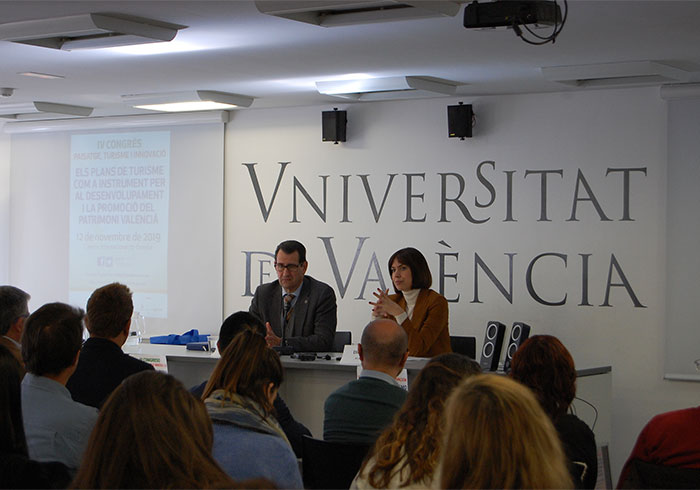 Gandia hosted on Tuesday, November 12th the 4th Congress Paisatge, Turisme i Innovació (Landscape, Tourism and Innovation) which focused on highlighting the 9 touristic plans conducted by researchers of the Universitat de València. From medieval fortresses of the interior, to the Turia River Natural Park or the Ducal Palace of Gandia, the plans focus on developing the tourist potential of spaces, elements or heritage symbols of the Valencian territory.

Around a hundred of attendees, including local agents, political actors, technicians in tourism and heritage gathered at the Gandia International Centre of the Universitat de València, which has been the venue of the 4th Congress on Paisatge, Turisme i Innovació this year.   From the interventions of the directors of the tourism plans executed by the Universitat de València, a space for reflection was created and the keys for their adequate promotion and evaluation were analysed.

The closing ceremony was presided by the Mayoress of Gandia, Diana Morant, and the Vice-Principal for Territorial Projection and Society.  Also present at the inauguration was the director of the Gandia International Centre, Emili Aura. Both the 4th Congress and the master plan programme were developed within the framework of the collaboration agreement signed between Turisme Comunitat Valenciana (Valencian Community Tourism) and the Office of the Vice-Principal for Territorial Projection and Society of the Universitat de València.

The Vice-Principal for Territorial Projection and Society, Jorge Hermosilla, who coordinated the congress along with the Professor Walesska Schlesinger, cap d’Iniciatives (Head of Initiatives), of this Office of the Vice-Principal, has highlighted the “the opportunity for institutional collaboration, in which all actors –Public Administrations, business, local technicians, local society and universities – are necessary for the touristic development.” The Vice-Principal pointed out that precisely from this collaboration this 9 plans have emerged based on territorial uniqueness, cultural tourism and sustainability that place value of the Valencian cultural heritage, which is a large fraction of the territorial resources.

For her part, the Mayoress of Gandia, Diana Morant, highlighted the change in the tourism chronicle to promote Valencian heritage and that this turn has been made by the hand of administrations, the Universitat and the public. “Gandia is a touristic city that has known how to go beyond the tourism of great weather and beach, valuing all the wealth of its heritage, its history, its culture and its gastronomy that the city has,” said Morant who thanked the Universitat de València and Turisme Comunitat Valenciana that the Ducal Palace has been selected as one of the spaces to develop a Master Plan on the building. “The Ducal Palace already has a Master Plan that dates back to 2010 but was focused on the rehabilitation and with this new initiative we will give a boost to touristic appreciation that allows incorporating new forms of management that can give an added value,” concluded Morant.