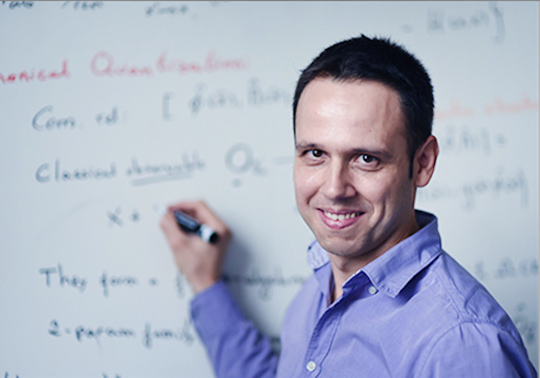 The International Society on General Relativity and Gravitation has just given to the physicist Iván Agulló, from Elche, its award IUPAP to young scientist 2016. Agulló was award with the Physics degree in the Universitat de València and got his doctoral studies in the Institute of Corpuscular Physics (IFIC, CSIC-UV).

This award, considered one of the most prestigious internationally to young researchers in these fields of Physics, recognises the highlight scientific contributions of the Valencian scientists to the study of the physics of the first instants of the universe and of the called theory of the quantum gravity.   The award will be given in July during the international conference about general relativity and gravitation which will be celebrated in the Columbia University (New York, U.S.A.).

Iván Agulló Ródenas (Elche, 1980) did his thesis in the Institute of Corpuscular Physics (IFIC, CSIC-UV) under the direction of the full-university professor of the of the Universitat de València (UV) José Navarro Salas. His thesis got the extraordinary award for outstanding PhD theses.  Lately, he did postdoctoral stays in the universities of Penn State and Wisconsin-Milwaukee, both in United Sates. He got an European grant Marie Curie in the University of Cambridge (United Kingdom). Currently, he is trainee lecturer in the Louisiana  State University (U.S.A.).

Among his recognitions highlights the award of the Gravity Research Foundation in 2011 for a work about the influence of the quantum mechanics in temperature fluctuations of the cosmic microwave background in the primordial universe, published with the prestigious scientist Leonard Parker; and the Young Researcher in Theoretical Physics of the Royal Spanish Society of Physics in 2011.

Recently, Agulló received the award CAREER of the National Science Foundation of the United States, granted woth 400.000 dollars, to support his research about the early universe.

The International Society on General Relativity and Gravitation is one of the commission members of the The International Union of Pure and Applied Physics (IUPAP). This society, founded in 1971 to promote the study of these field of physics, then in development, has had among its presidents Roger Penrose, collaborator of Stephen Hawking.

The award IUPAP to young scientist of the International Society on General Relativity and Gravitation was established in 2013. Each commission of the IUPAP (it has 20 societies associated, from statistics physics to particles physics, more 4 members, among then is General Relativity and Gravitation) offers an award to the most notable young researchers of its field each year.