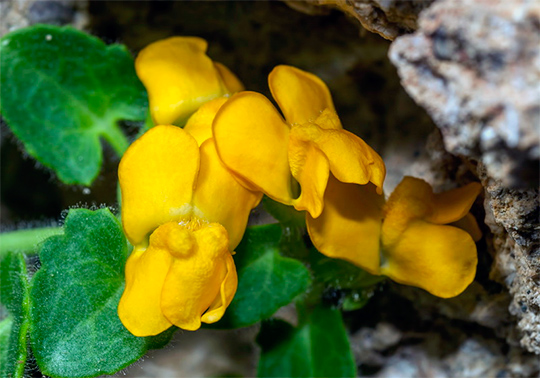 Botanists of the universities of Valencia and Almeria have just described and made publish a new genre of vascular plants. This is one of the most significant discoveries for the past years in the Spanish flora. The scientific article has been published in the last edition of ‘Phytotaxa’, a prestigious international magazine specialised in the description of new species.

The plant has been named ‘Gadoria falukei Güemes & Mota’, making reference to its place of origin and, probably, its unique location nowadays: the Sierra de Gádor. Furthermore, it pays tribute to the person who discovered it in the country and appreciated its peculiarity, Francisco Rodríguez, ‘Faluke’.

Five years ago, members of the Naturalist Association of Almeria found a specie that they couldn’t determine at the Sierra de Gádor, in Almeria. They sent some samples to Juan Mota, full university professor of Botany of the University of Almeria; and Jaime Güemes, keeper of the Botanical Garden of the Universitat de València to study them. These botanists, who had already worked together in several studies about Spanish threaten flora, appreciated early the peculiarity of this discovery and decided to carry out a rigorous taxonomic study that has been extended for some years.

During the process, a contrastive investigation has been conducted regarding the shape of the flowers and fruits of all species of the group. It has also been observed their chromosomes and carried out a sequencing of some of their genes. All has been done in order to establish evolutive relationships between this new specie and other species of well-known genres of the same family. Other objective is to determine the age and the possible origin of such singular discovery.

It is estimated that such ancient specie could be distinguished in the Miocene, 5 million years ago.  Perhaps the plant was hidden in the most temperate areas of the Iberian Peninsula during the glaciations of the Quaternary Period and acquired adaptations that let it to survive in difficult temperature conditions and dryness characteristic of the Mediterranean climate in the south of the Peninsula. This is a specie that, in this day and age, is at risk of extinction because are known only 16 breeders in a unique location of the Sierra de Gádor. This plant has been catalogued as alarmingly threaten, according to the criteria of the UICN evaluated during this study.

For this reason, the research has also addressed some aspects about its reproductive system.  It is essential to know how the fertilisation is done, how the seeds behave and how to produce adult individuals to establish a future preservation strategy. As the authors say, the strategy is subjected necessarily to the inclusion of the specie in the Andalusian and Spanish Catalogues of Threaten Species, with the maximum level of protection; and to take preservation actions in situ and ex situ. For all of this, some samples are preserved in the germplasm bank of the Botanical Garden of the Universitat de València and the University of Almeria.

The authors emphasise that the discovery has been carried out thanks to the citizen science, which, in this case, has been reflected in the collaboration between the well trained lovers of botany, with great knowledge of flora in their territory; and the researchers, who have applied their scientific knowledge to the study and the means of their research centres. The result is a notable discovery that increases the biodiversity wealth in the Iberian Peninsula and reveals the useful collaboration between volunteer and professionals to preserve the Spanish natural wealth.

The institutional and private support has also been important to defray the costs of the studies. The work has counted on the contribution, to a greater or lesser extent, of the following institutions and public and private organisations: Ministry of Economy and Finance, General Foundation of CSIC, Mohamed bin Zayed Species Conservation Fund and Knauf GmbH Branch Corporation.