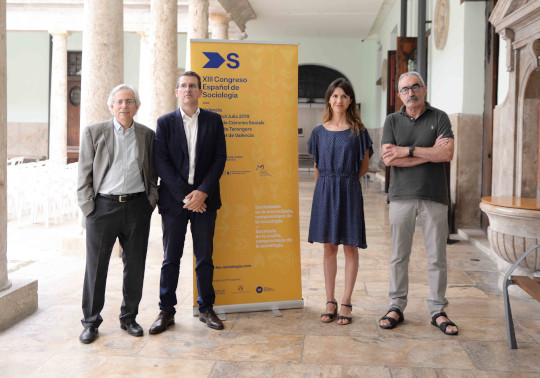 The Congreso Español de Sociología (Spanish Sociology Congress) was the ‘most international’ of the 13 that have been held in its 40 years of history. The president of the organising commitee, Miguel Ángel García Calavia, Professor at the Universitat de València, highlighted that for the first time experts from all over the world were reunited. Of the 2,000 participants, there were more than 250 foreign participants, almost half of them from Latin American countries. For the first time, foreign-language conferences were given. This congress, organized by the Federación Española de Sociología (FES, Spanish Federation of Sociology), the Department of Sociology and Social Anthropology of the Universitat de València and the Associació Valenciana de Sociologia (AVS, Valencian Sociology Association) took place on July at the Tarongers Campus of the Universitat de València.

In the presentation act, García Calavia informed of the presence in the congress that took place in Valencia of the most representative international associations of Sociology from all over the world, the International (ISA), the American (ASA) and the European (ESA). The convergence of these three Sociology collectives thus reinforced the internationalisation that they wanted to imprint from the organisation.

To this relevant novelty,  the opening of the FES to public and civil institutions must be highlighted, which is, in fact, an approach in the congressional field, which will be effective through various forums with unions, employers and NGOs, among other institutions. García Calavia did not overlook the fact that this meeting served to claim that Sociology is part of the educational programmes of schools and institutes in Spain, as well as other subjects such as “History, Language or Chemistry”. He stated that the group he represents “is concerned that in the educational system in Spain is absent knowledge of society in Primary and Secondary Education”.

Along with García Calavia, the President of the FES, Manuel Fernández; the Vice-Principal for Culture and Sport, Antonio Ariño; and Sandra Obiol, from the organising committee, also participated in the presentation of the Valencia congress.

Fernández, for his part, referred to the choice of Valencia as the venue for the congress as a recognition of Valencian sociology, among other things for the importance of the Department of Sociology of the University of Valencia, which has the most members in Spain, with more than a hundred professors. He highlighted the high level of the symposiums, as well as the presence of major national and international references in Sociology, including the latest Princess of Asturias Award 2019 for Social Sciences, Alejandro Portes.

The inauguration took place at the Faculty of Medicine and Dentistry on July 3rd.  The event was attended by the acting Minister of Labour, Migrations and Social Security, Magdalena Valerio; the President of the Generalitat Valenciana (Valencian Government), Ximo Puig; the Principal of the Universitat de València, M. Vicenta Mestre. The inaugural lecture was given by María Ángeles Durán, National Prize in Sociology and Political Science 2018.