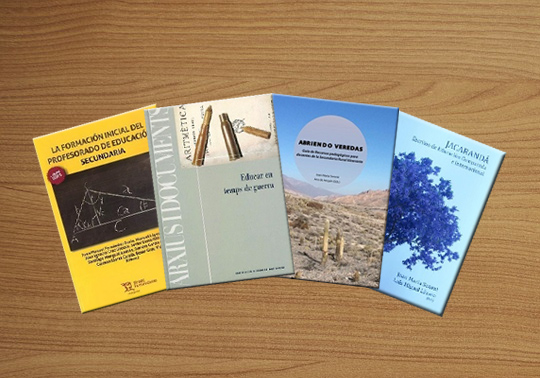 The Assembly Hall of the Faculty of Philosophy and Education Sciences of the Universitat de València holds the presentation on Monday 13. These four books were published between the end of 2016 and 2017 by the Department of Comparative Education and Education History. The books consist of a series of documents, thoughts and experiences related to the lines of research of the department: education history, comparative and international education and education politics.

The titles of the books which will be presented are: ‘The initial training for Secondary Education Teachers’; ‘Teaching in times of war’; ‘Jacarandá: documents of comparative and international education’; and ‘Breaking grounds: teaching material for Rural Secondary Education Teachers.’ The people who have coordinated these publications as well as Andrés Payá, director of the Department of Comparative Education and Education History, will take part in the event at 12:00.

“The four monographies which will be presented are collective works carried by Teaching Staff of the Department together with other researchers.”  They are the result of the work which has been made in development aid projects, scientific conferences or lines of research that concern. The professors and collaborators of this teaching and researching unit of the Universitat de València are devoted to these lines of research,’ affirms Andrés Payá.

‘The initial training for Secondary Education Teachers’ (DDAA, Tirant Humanidades, 2016) deals with the international concern for the Secondary Education Teachers training. The special responsibility of this educative level for the future of their students, the huge increase of the school attendance and the different characteristics and special needs of the educational support justify this concern.

The book ‘Teaching in times of war’ (DDAA, Institució Alfons el Magnànim, 2016) deals with the education and the school in the Spanish Civil War context both in the front and in the rear. It also addresses the attempt of educate in the widest social and cultural sense, as the authors say. The book goes over the Spanish historical context and presents the pedagogical debate and the recovery of the experiences of the early 20th century, time of wars in Europe.

‘Breaking grounds. Educational resources guide for Rural Secondary Education Teachers’ (Joan María Senent, Ana de Anquín, Universitat de València and Fundació Càtedra UNESCO, 2017) is a book whose main aim is to contribute to the strengthening of the Rural and Intercultural Education. It considers the purposes of the Argentinian education which recognises the cultural and environmental characteristics of the social groups affected by the journeys.

The publication of these four books has been possible thanks to the publishing policy of the Department of Comparative Education and Education History of the Universitat de València. The UNESCO Chair of the University of Valencia General Foundation, the Institution Alfons el Magnànim of the Valencian Provincial Council or the Tirant lo Blanc publisher have helped and supported this publication.