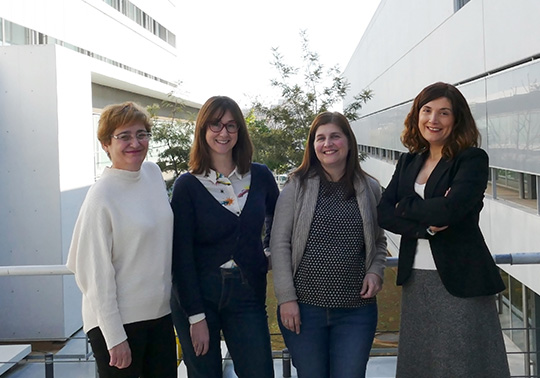 Carmen Botella, Silvia Rueda, Emilia López-Iñesta and Paula Marzal, researchers from the School of Engineering (ETSE-UV) and the Faculty of Teaching of the University of Valencia, have published an article that describes how a program implemented by the centre since 2011 to reduce the gender gap in STEM (Science, Technology, Engineering and Mathematics) has contributed in part to increasing the proportion of women enrolled.

In an article published in the Entropy magazine, the researchers note that the School of Engineering of the University of Valencia (ETSE-UV) is more than two percentage points above the state average in this area. Thus, in the 2010-2011 academic year, the percentage of women in STEM degrees in the Valencian institution (13.55%) was very close to the Spanish average (13.36%). A year later, the ETSE significantly improved its figures and reached 15.28%, regarding a 13.33% in the whole of the State, while, in the latest data recorded, the 2016-2017 academic year, the difference between the University of Valencia and the rest of Spain reached up to two and a half points (14.55%, compared to 12.06%).

The authors state that currently the field of Information and Communication Technologies (ICT) is one of the most dynamic and with the most transforming power in society. Despite this, the percentage of women trained in this sector continues to decline throughout the state. The number of women who abandon their professional career also increases.

According to the article, these facts would be caused by several factors, such as the absence of mentors throughout their careers, the ignorance of female referents within the field, the difficulty in reconciling work and personal life, or the lack of support from the institutions. Carmen Botella, professor in the Department of Computing and advisor of the affinity group of the IEEE Women in Engineering of the ETSE-UV; Silvia Rueda, director of the Department of Information Technology and member of the Association of Women Researchers and Technologists; Emilia López-Iñesta, professor in the Mathematics Didactics Department, Scientix ambassador and mentor at StemTalentGirl; and Paula Marzal, professor of the Department of Chemical Engineering and director of the ETSE-UV participated in the article.

Since 2011, the ETSE-UV has been fighting this problem through a program that aims to reduce the gender gap in the ICT sector. To this end, meetings are held with the Secondary Education, Baccalaureate and Vocational Training centres in which stereotypes are fought. In addition, it is about encouraging those women who have opted for these careers to progress in their training using reference models and creating support networks, both during the academic training period and in the professional environment.

“Due to the transformative impact of ICT in the near future, it is important to work to increase the presence of women in the sector and avoid biases caused by algorithms that do not contemplate the gender perspective”, the authors state.

As indicated in the article “Gender Diversity in STEM Disciplines: A Multiple Factor Problem”, in the field of ICT, only one out of every five positions of power is occupied by women, and 88% of the patents presented are made by exclusively male teams. In addition, the wage gap causes that on average in this sector a woman perceives between 18% and 21% less than a man for the same job.