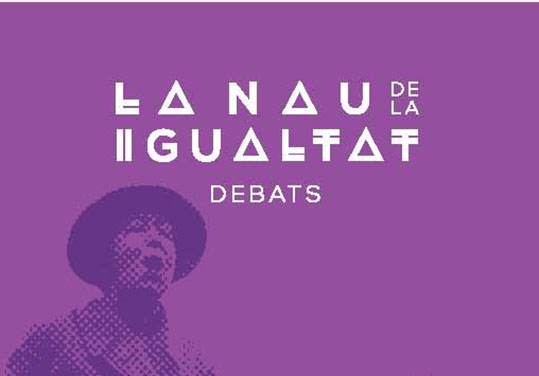 As a result of the social debate generated by the latest sentences on the area of male violence, the cycle of debates `La Nau de la Igualtat' proposes a new session with the debate `Justice and Feminism' this Thursday 31 May in the Paraninfo (Main hall) of the Universitat de València from 18:30h.

The event was attended by Lucía Avilés Palacios, judge and spokeswoman for 'Mujeres Juezas' (Women Judges), Teresa Peramato Martín, prosecutor attached to the Public Prosecutor's Office of the Court against Violence against Women, Margarita Soler Sánchez, president of the Consell Jurídic Consultiu and professor of Constitutional Law at the Universitat de València, and the journalist Rosa Solbes López, who will moderate the debate.

Among the objectives of the debates of “La Nau de la Igualtat” highlight the fact of debating on the key elements of the feminist thought with the purpose of progressing in order to achieve more agreed positions which benefit the fight and the social achievements on equality. The roundtables are undoubtedly an ideal framework for promoting reflection and dialogue. On this occasion, the debate will address the need to talk about feminist theory and law and how the gender hierarchy is still present in the legal world. Since September 2016 the Paraninfo has hosted several debates and has dealt with prostitution, surrogacy, shared custody, maternity or the fourth wave of feminism after 8M, among others.

Lucía Avilés is a magistrate of the Court of First Instance and Instruction number 3 in Arenys de Mar (Barcelona) and is one of the twelve judges who set up the Association of 'Women Judges' in December 2015. An association that aims to "contribute to the development and dissemination of Justice and Equality, by raising awareness and sensitizing the general public and judges in particular on the need to defend human rights".

Margarita Soler is president of the Consell Jurídic Consultiu of the Valencian Community. She was member of the Department of Constitutional Law, Political and Administrative Sciences of the Faculty of  Law at the Universitat de València from 1993, being reader from 2001 and director of the Department from 2008 to 2014. She was director of the Programme in the Ministry of Education and Science from 1989 to 1992. And now she is member of the Feminist Network of Constitutional Law.

Admission to the debate is free and limited to the capacity of the hall.

On the other hand, on the same Thursday, 31 May, just before the debate, from 18h. in the same auditorium Paraninfo of the University, the fourth edition of the Olga Quiñones Fernández Prize will be awarded to the best master's, bachelor's and doctoral theses in women's studies and for gender equality.

The Olga Quiñones Prize provides the implementation of the Equality Plan and in particular, is dedicated to research and teaching, confirming the will of promoting and strengthening the gender view in the undergraduate degree and postgraduate studies as well as in the research contents.

In this occasion, the prize of the modality TFM (final project) will be awarded to Paula Moreno Malo for her work of final project “From the window: Woman with goat. 1929 of Maruja Mallo. From her window to mine 1987 of Carmen Martin and From your window to mine 2011 of Paula Ortiz”. Likewise, it is agreed to award a second prize to Enrique Ruiz Gros for his work “Triple convictions of women imprisoned in Spain: Institutional, social and personal. Analysis from a gender perspective of the Spanish female penitentiary system”.

The prize to the modality TFM (master’s degree project) is awarded to María Morales Sánchez for her work in the end of her master's degree `Femvertising and neoliberal subjectivation: Critical analysis of an emerging model of femininity in the current publicity” and for Marta Marón Gavila for her master’s degree final project “The representation of women in action films. The Mad max case: Fury on the road as a reinvention of modern heroin”. In addition, it is agreed to award a second prize to Carmen Ramos González for her work “Margins of representation: porn films, sexual politics and feminist perspective”.

Finally, the prize of the modality Doctoral Thesis will be given to Mònica Gil Junquero for her thesis: “Budget with gender perspective in the Spanish State”. Furthermore, it is agreed to award a second prize to Sofía Pereira García for her thesis: “ ‘Trans persons’ bodies in context: experiences in daily life, sport and physical education”.

The prize bears the name of Olga Quiñones Fernández, the first woman director of the Equality Unit of our university and a woman linked to this institution and to the fight for gender equality.

She was awarded with the Mujeres Progresistas Prize 2012 for her recognition of her work and her commitment with de equality policies.