The IFIC, among the elite of the global research to improve the detection of breast cancer 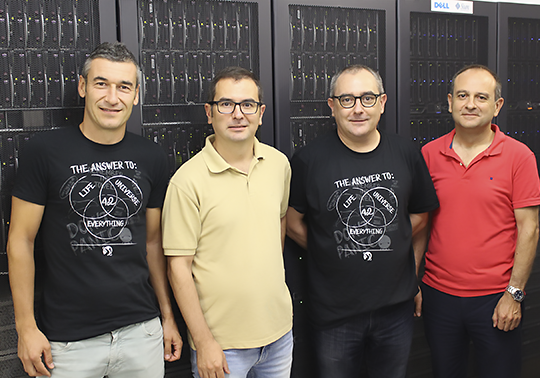 Researchers of IFIC (UV-CSIC) and of iTEAM (UPV) have been selected for the final phase of the Digital Mammography DREAM Challenge, a worldwide project aimed at improving the detection of the breast cancer through the interpretation of the mammography with artificial intelligence techniques. The Valencian team will take part in the development of a new algorithm which facilitates the diagnosis, reduces the false positives and avoids the unnecessary repetition of mammograms.

A team of researchers of the Universitat Politècnica de València and the Institute of Corpuscular Physics (IFIC), mixed centre of the Universitat de València and the Spanish National Research Council (CSIC), have been selected for the final phase of the Digital Mammography DREAM Challenge (DM Challenge), a worldwide project led by the main American institutions of fight against cancer, IBM and Amazon, whose final purpose is to improve the detection of the breast cancer through the interpretation of the mammography with artificial intelligence techniques. It is also about reducing the false positives and avoiding, in this way, the unnecessary repetition of mammograms or invasive tests.

More than 1200 researchers from all over the world divided into different teams took part in this first competitive phase. The purpose was to identify the best groups to continue in the collaborative phase. Only eight of them have moved on to the finals by having a significant better punctuation than the rest. The UPV-IFIC team is the only Spanish representative among them. The objective of the finalists is to build a new model, which is based on advanced prediction algorithms, to help the medical experts in the diagnosis of this disease.

‘Nowadays, out of 1000 women that undergo a mammography, 5 are diagnosed with cancer. But 100 of them are once again called to undergo this test again, which brings the patient both stress and radiation in her body’, says Alberto Albiol, a researcher at the Institute of Telecommunications and Multimedia Applications (iTEAM) of the Universitat Politècnica de València.

In the first phase of the challenge, the participants completed two tasks: they developed an initial predictive algorithm to analyse images of digital mammography and a second one which is able to analyse both digital mammography images and additional clinical information. It is the first time that there is access to an image collection of this magnitude with scientific purposes. The images (more than half a million) come from the hospitals. As a consequence, the results will be easier to transfer to the clinical practice.

The team of Valencian researchers have developed a prediction algorithm from zero which presents important advantages for its use in the clinical practice. This advantages have proved to be keys for being selected in the final phase of this ambitious project. In order to do so, their work is based on convolutional neural networks, an artificial intelligence technique that simulates the neurons of the visual cortex and allows the classification of images, in addition to self-learning of the system. They also apply principles regarding the interpretation of X-rays, where the group has several patents.

According to Francisco Albiol, researcher of the Institute of Corpuscular Physics (IFIC), ‘this algorithm makes possible the detection of malignant lesions and it is the best prevention system at a large scale among those that are available for this king of disease. One of the main advantages is that this type of development will allow a rational use of equipment such as mammogram machines, where the problem today is not so much the acquisition of equipment as the lack of expert radiologists to extend prevention campaigns to a greater range of population.’

Like other participants in the first phase of the challenge, the researchers of the UPV and IFIC worked with a database of hundreds of thousands of mammograms and data of clinical trials completely anonymous that was found in the cloud and provided by Health Group And the Icahn School of Medicine Mount Sinai, in a clear example of managing large volumes of data or Big Data applied to health. Moreover, the American Food and Drug Administration (FDA) is following the proceedings that are being made during the challenge in order to make these kind of techniques can be applied to health systems.

In the tests developed in the first phase of DM Challenge, the algorithm of the Valencian researchers obtained a predictive precision of 80%, which is already inferior to the one of an expert radiologist. After this phase, the eight winning teams are now working jointly with a main objective: to develop an algorithm that can match the accuracy in the diagnosis of an expert radiologist. ‘The work we are doing in this global challenge will make it easier for doctors to diagnose and clarify the interpretation of mammography images,’ concludes Alberto Albiol.

The results of this final collaborative phase will be published in Nature and, if the algorithm is capable of reproducing the diagnosis of an expert radiologist, the organization will distribute the million dollars destined to this challenge among the finalist teams.