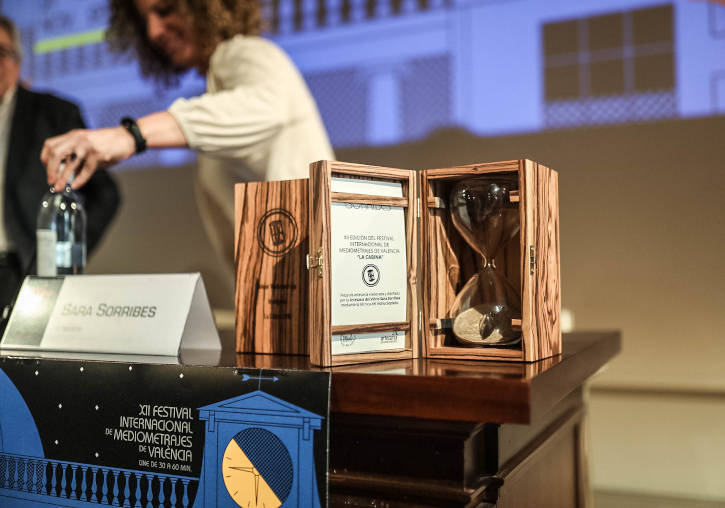 The Centre Cultural La Nau of Universitat de València has held on Wednesday, 13 November, the presentation of 12th edition of La Cabina-International Festival of Medium-length film of València (that will take place from 21-29 November), with the presence of the Vice-principal of Culture and Sports, Antonio Ariño; the Deputy Manager of Audiovisuals and Film of IVC (Valencian Institut of Culture), José Luis Moreno; the councillor of Cultural Action of the Valencian City Council, Maite Ibáñez; the festival director, Sara Mansanet, responsible of the Aula de Cinema of Universitat de València; and Sara Sorribes, glass artisan who has created the trophy of this edition.

At the official presentation in front of the media, La Cabina has announced all the changes that has prepared for this new edition, that will open on Thursday 21 November, at 8:30 p.m., at Centre Cultural La Nau.

The Vice-principal Antonio Ariño has remarked the involvement of all the institutions, such as Generalitat Valenciana (Valencian Government) or the City Council of València, and the private company, as Caixa Popular or Cerveza Turia, that help the Festival “keep growing and achieve its international projection”.

José Luis Moreno, Deputy Manager of Audiovisuals and Film of IVC, has qualified as “necessary for València” to keep this festival because stands for a format that doesn’t have space in other circuits: “We are pioneers in this defense”, has ensured.

On her part, Maite Ibáñez, whose Valencian Ministry Department relies La Mutant and this year joins as headquarter of La Cabina taking place there the activity “Carne Cruda on Tour” on 25 November, has commented to the attendants: “For the City Council of València is a pleasure to take part in this edition as headquarter because La Cabina spotlights for its philosophy of integrating every art: film, design, musica, fashion... As well as La Mutat, a space with all the fields”. 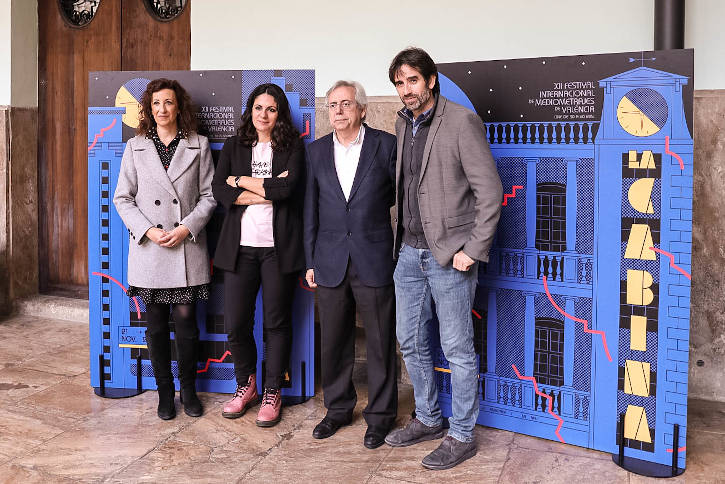 Sara Mansanet, Director of the Festival, has said that the Festival’s philosophy of “defending an audiovisual format difficult to sell” continues and keeps giving steps forward. Among them, we can find the renewal of the agreement with Filmin platform and the consolidated individual sessions, which are possible due to the trust of the responsibles of the Filmoteca and La Nau programme, “giving the importance of the whole work that must have every medium-length film”, has claimed. Mansanet has qualified this edition as “record edition: with 18 premieres in Spain, an European premiere and seven premieres in the Community of Valencia”.

La Cabina will open on 21 November with an act that will take place in Centre Cultural La Nau of Universitat de València hosted by María Fuster. From that day, València will live eight days of the best cinema between 30 to 60 minutes.

From Amalgama they have also highlighted the eleven films that form this section raise a debate, as “the hard acceptance of homosexuality in a catholic and conservative society such as the Polish, to the love relationship between humans and no-humans in Japan, also, the policy and the social denunciation plays an important role”.

Whereas in the Official Section, where 15 medium-length films compete from different countries and territories, such as France, Hong Kong, Sweden, Germnay, USA, Argentina, Algeria, Canada, Italy and Greece, “one is an European premier: Éléonore, by the Canadian Martin Rodolphe Villeneuve, and other 11 are premieres in Spain, some of them from festivals such as Venice or Cannes as Ultra Pulpe (Bertrand Mandico), Jouney Through a Body (Camila Degeye) or Electric Swan by Konstantina Kotzamani”.

Complementary sections and activities
The Centre Cultural La Nau becomes now in the main headquarteer of La Cabina. In this line, there takes place the opening and closing ceremony, and the section to Amalgama competition, almost all the complementary sections: Inèdits, AulaCabina, Videopoesia, the new Matinal family session and Visuals.

Inèdits keeps its bet for medium-length film screenings of affirmed directors. In 2019, they presented five films of outstanding directors as Helena Taberna, Suzie Templeton or Barbara Hammer, as well as recovering the works of François Truffaut o Jonas Mekas.

The audiovisual education remains of huge relevance for La Cabina. This is evidenced by the adding of sessions in AulaCabina section so that more secondary or bachillerato students can asist to La Nau, in morning events, and to enjoy the selection of medium-length films in a didactic adapted context, as well as expand their knowledge about the film industry and professions.

The musical point will be set by the Visuals section, which changes its headquarter and will take place in Matilde Salvador hall at La Nau. There, two Valencian groups (Amatria and Wisemen Project) that will include visual techniques in their performances, will offer a concert on 28 November, adding to the image’s potency with live music. This activity, consolidated inside the Festival, has verified its success by making a waiting list at the festival’s web, because there aren’t tickets. 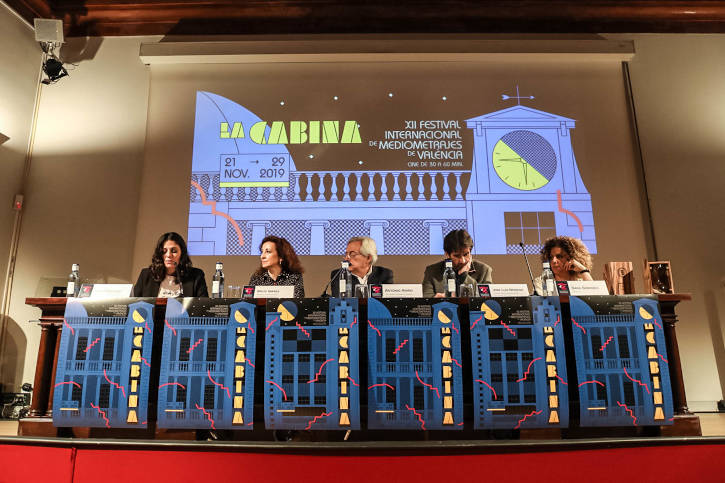 Barreira A+D renews its commitment with La Cabina
On the one hand, it is offered to the general public and in collaboration with the Master’s Degree of Communication of Fashion at Barreira A+D, a new event dedicated to Fashion Films, which have become into essential audiovisual tools for fashion communication. This screening will be on Monday 25 November in Barreira and will be hosted by Maite Sebastiá, Víctor Claramunt, Eduardo Jaircovich and Carmen Errando.

Also, joined to Centro Sperimentale i Cinematografia di Italia, and as part of Escuela Superior de Cine in València, they offer for the second consecutive year the Barreira award to best audiovisual writting in the Amalgama section of La Cabina, gifted with a scholarship for the writing workshop that will be given by the film maker Pablo Berger in València.

But its collaboration is more than that. Barreira offers with La Cabina Festival the premier in Spain of medium-length film directed by Luca Guadagnino for Valentino “The Staggering Girl”, and starring by Julianne Moore, Mia Goth and Kyle MacLachlan. This exclusive pass will be projected in La Filmoteca on Sunday 24 November at 9:00 p.m.

A piece of València in La Cabina trophy 2019
Also it has presented the trophy that the glass artisan Sara Sorribes has created for the 12th edition of the festival. “It has been an honour to do this trophy with complete freedom. The only pattern that Sara (Mansanet) gave me were the concepts of “time, València and your art”. In that line, what I have done is a tribute to the 100 years that the Sorribes company keeps doing hourglasses and I put sand from Malvarrosa”, confesses the artist and adds: “Whoever takes the trophy, will have a part of me and València”.

Vidrio Sorribes was founded in 1920 and more than 20 years that Sara Sorribes, third generation of glass artisans in València, forms part of the company. It was in 2011 when she started solitarily her career in charge of the company that keeps active due to her rebrand capacity and, at the same time, to her commitment with the profession and tradition. The balance between tradition and vanguard is the reason of her achievements and recognitions, such as Artisan Woman award of the Community of València in 2015 o her nomination as finalist in the National Craft Awards in 2010.

The Cabina-International Festival of Medium-length Film of València, that will take place from 21-29 November, is coorganized by Aula de Cinema of the Office of the Vice-Principal for Culture and Sports, enrolled in the General Foundation of Universitat de València; the Valencian Institute of Culture; the Valencian Ministry Departmen of Culture through the General Management of Culture and Heritage; the Cultural Action Regional Department of the City Council of València, with the support of Cerveza Tura and Caixa Popular.