Solidarity trip to Peru to cooperate with Amazonian native communities

The Universitat de València has organised a solidarity trip to the Amazonian native community of Chirikyacu, in Peru, next August, in order to involve the university community in this collaboration project 0,7 that has been in operation since 2008 and has just finished one of its stages. People interested in this project are summoned to attend an informative meeting 15 February, at 18:30h in the building of the Institutos de Investigación of Tarongers Campus (ERI de Sostenibilidad).

The native Quechuan community, located in the Amazonian forest of Peru, is composed of only 400 members. “It’s a very poor zone, in economic terms, with high levels of malnutrition and illiteracy” has claimed the person in charge of the university collaboration project. The responsible is the honorary professor of the Universitat de València Javier García Gómez. Furthermore, this area suffers a significant and dangerous deforestation due to the extractive agriculture, which is the main source of livelihood of the indigenous population. The environmental impact of this practice has an effect on the reduction of the water basins. This has been alerted by the group of García Gómez, which started some collaborations works through arrangement with the National Peruvian University of San Martin in 1998.

After some stages, it has been constructed an accommodation in order to assist tourism as an alternative economic driver that avoids deforestation as much as possible. “We always have the intention to propose economic alternatives targeted to the development of a sustainable tourism in order to improve the living conditions of the population and the health standards of the zone”, says the professor.

The accommodation, which travellers have named ‘Valencia Wasi’ (House of Valencia), will be the destination of the volunteers who decide to make the solidarity trip next summer. There, they will meet and mingle with the native community; and will carry out some works related to the improvement of facilities such as painting, small repairs, and farm labours or craft workshops. In their free time, volunteers will visit some places of interest in heritage.

This collaboration project, that has just finished one stage within the IV Call of the Programa 0,7 Una Nau de Solidaritat of Universitat de València, has the aim to turn into an “alternative to the exploitation of natural resources of the zone” in order to improve the living standards of the natives by the promotion of tourism and the realization of sustainable productive activities.

In the context of the IV Call 0,7, some training actions in environmental, tourist and health matters, have been carried out; and a farm of guinea pigs and hens has been built.  Some cards of tourist products and informative brochures have also been elaborated. This material has been disseminated in the last Travel Fair in Lima last November.

Javier García Gómez has claimed his own way to continue with the university collaboration activities in this Peruvian area.”Viability is very important for the project to be consolidated and we should continue supporting this project until the recipients could develop it without our help”, claims Javier.

For this reason, he has announced next stage to the V Call 0,7 under the title of ‘Warmi Wasi’ or ‘House of the Woman’, to build a meeting place that hold women of the area. They could learn to do craftwork and attend to training courses. This place could become a centre for cultural dissemination by the creation of a library.

Manuel Castillo Award in the category ‘Iniciatives Lluís Vives’’
Professor Javier García was awarded last edition of the Manuel Castillo Awards of Research and Journalism for  Peace and Cooperation, organised by Sud-Nord Trust of the University of Valencia General Foundation. The work of García Gómez was appreciated by the Teaching Staff and Research department, within the new collaboration category ‘‘Iniciatives Lluís Vives’ for the development of the Universitat de València. This award was given to him, according to the jury, “for his initiative in collaboration projects in the Amazonian native communities of Alto Cumbaza, in Peru”. 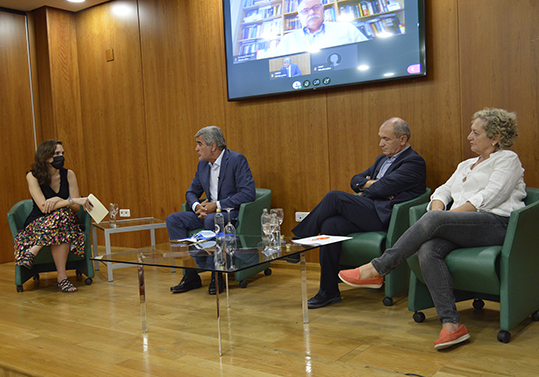