Thriller, black comedy and women’s literature are the main topics for the new course of Club de Lectura Alumni UV 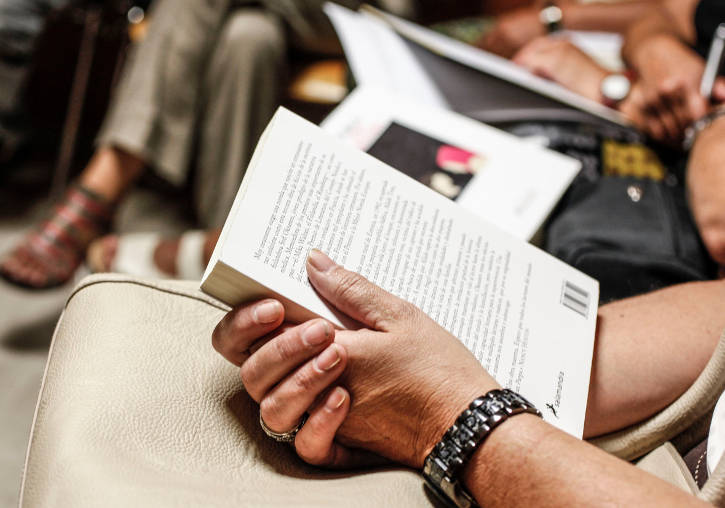 The Club de Lectura Alumni UV returns with the new course and schedule nine readings between October and June. The first meeting, Tuesday 15th October, went into the black novel of the Nicaraguan writer Sergio Ramírez, Ya nadie llora por mí. As usual, the Club will take place at Public Library Palau de l’Exposició every first Tuesday of the month at 6:00 p.m.

Sergio Ramírez comes back to the black genre with Ya nadie llora por mí. The narration is focused on the corruption and the authority conspiracy in a police case where no one is innocent. This book is useful to find out the revolutionary speech of the contemporary Nicaragua.

Actually, if this Club de Lectura has something distinguished, is the background of every novel which is analysed. After reading, the group exchanges opinions about the novel action, obviously, but also about the historic, cultural and social context, that involves it.  Some keys that readers must know in order to take part in the following discussion are: how are the characters build, how they develop throughout the novel, how changes their environment…

Sometimes, the Club de Lectura Alumni UV, which started six years ago, can invite the author of the novel or experts of the book theme of that month.

The next reading, on November 5th, will be El corazón de las tinieblas (Heart of Darkness), a Joseph Conrad classic, an extensive story or a short novel written at the end of 19th Century and published at the beginning of 20th Century. It is set in Africa and inspired during the six months the author lived in Congo.

On 3th December, Alumni will deal with another classic, specifically from the Hispanic literature: Pedro Páramo written by Mexican Juan Rulfo. Another short novel with a huge historic background that is classified as revolutionary novel. Its excellent quality, condensed in a short text with a broad content, where it is used the magical realism, were the ingredients to make the book pioneer of the Latin American Boom, which was inherited by García Márquez, Cortázar, Vargas Llosa or Carlos Fuentes.

Planned readings for 2020: on  January 14th: La memoria del amor  of Aminatta Forna, who has dual Scottish-Sierra Leonean nationality; on February 4th  Nosotros en la noche (Our Souls at Night), the last novel of the US writer Kent Haruf published posthumously and it was adapted for film by Ritesh Batra with Robert Redford and Jane Fonda as leading roles; on  March 3th: Canción dulce, a contemporary thriller  of the Moroccan writer Leïla Slimani where she uses the characters to explain the society problems through her conception of love, education, money, submission and status and cultural prejudices; on April 7th: El devorador de calabazas (The Pumpkin Eater), a clever black comedy of the British journalist Penelope Mortmier; on May 5th, another women’s literature, Tierra de mujeres of María Sánchez, a close and familiar look to the rural environment; and a classic will close the course on June 2th: Matar a un ruiseñor (To kill a Mockingbird) of the US writer Harper Lee, who won a Pulitzer Prize and the novel was adapted for film.

The attendance of Club de Lectura Alumni UV is free and if you want to take part in, you should make contact with the Alumni UV Office (+34 963531070 or amics@uv.es).