On the occasion of International Day of Persons with Disabilities on 3 December, the Universitat de València has celebrated along the week the Event for Inclusion ‘Somos iguales, somos diferentes’ (We are the same, we are different), that has started on Monday 2 at the Faculty of Psychology’s Hall with the exhibition’s opening ‘Slow E-Motion’, organised by Asindown Foundation.

“We are an university that bets for the quality teaching, research and transfer of knowledge with transversal values that are equality and diversity, because only like that we will make a more inclusive society and university and thus happier. At Universitat de València we work for the inclusion of all people, with different capacities that we can’t stop taking advantage of it as university and as society”, claimed the Principal María Vicenta Mestre during the act, which has also followed by the dean group that is headed by Mª Dolores Sancerni; the general manager of General Foundation of Universitat de València, Cristóbal Suria; the members of UVdisability service and its manager, Celeste Asensi; as well as girls and boys of Asindown.

The exhibition, which had several panels showing photographs that told values, it was visited at Faculty of Psychology’s Hall until Thursday 5 and pretend to “reflect which are the characteristics and the way of life of people with Down syndrome”, pointed out the coordinator of CAI Asindown and psychologist of the entity, Mamen Buigues. “It’s entitled ‘Slow E-Motion’ because we are always explaining to the society that the people with Down syndrome have a way of feeling that make people around them to stop and feel the life in a different manner. With the exhibition we have tried that people watched and sensed how a person with Down syndrome feels and how they make feel people around them”, explained. 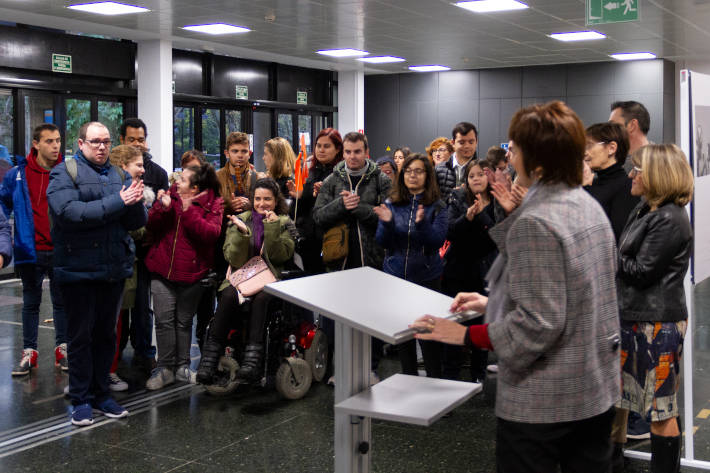 Programme
The integration’s service for people with disability of Universitat de València, UVdisability, registered in General Foundation of this academic institution, organises every event of this week that takes place from 2 to 5 December with numerous activities among workshops, conferences, roundtables, solidarity market in the Faculty of Medicine and Dentistry’s hall, and several play activities.

Also, each edition is specially dedicated to a kind of disability. According to manager of UVdisability, Celeste Asensi, “this year we wanted to raise awareness of people with deafness: in our university community there are some people that use sign language and we have many students that would love to learn it, for that reason we have opted in our programme for workshops for introducing to the sign language”.

These workshops had taken place in several spaces of the Universitat every day on mornings from 11 to 13.30, and afternoons from 15 to 18.30, and were aimed at the university community: students, Professors and administrative and service staff body.

On Monday 2 there was also a workshop of Braille organised by ONCE and the performance ‘Ballanto, terapia ocupacional a través del baile’ (Ballanto,occupational therapy through dance), planned on this day, will be on Monday 9 in Psychology’s hall, at 17.00.

On Tuesday 3 had taken place the activity ‘Danza y movimiento’ (Dance and movement) in Sports Pavillion at Blasco Ibáñez (at 9.00) and in the afternoon, at informatics classroom of UVdisability held the session ‘Gestión del tiempo en la preparación de exámenes’ (Time management for preparing exams) aimed at students with disabilities.

On Wednesday 4 all morning, at Faculty of Philosophy and Education Sciences, took place the third ‘Jornada Fibromialgia de la Comunitat Valenciana’ (Event Fibromyalgia of the Valencian Community), organised by the AVAFI association. In the evening, Carmen López, from AVANT association, gave a conference about addictive behaviours (Aulari III, at 3.00 p.m.); and Physical Education and Sports Service from Universitat organised some discussion panels on the current situation and the future tendency of adapted sport in the Valencian Community (Aulari V, at 4.00 p.m.).

On Thursday 5, Xavier Sanmartín, from the AVALCAB Association, talked with the student body of Social Work about eating disorders prevention (Aulari Oeste de Tarongers, at 9.00 a.m.); and a roundtable closed the day with two members of UVdisability, who told their experiences at the Universitat.

“It’s about real experiences of people with disabilities that have achieved the degree at one course per year with the needed resources, finishing on the same conditions to everybody else. The aim of our service is ensuring equal opportunities, for that reason this week, we try to show these students who really study at our university as just another student”, explained Celeste Asensi.

The Universitat de València continues being the on-site university with more disabled students enrolled (over a thousand), from the Valencian Community as well as other autonomies. In this line, Asensi added: “People consider València attractive to come, because they know that there is a service that has been working on the inclusion for many years and which makes that the teaching and administration staff to become more concerned in diversity”. 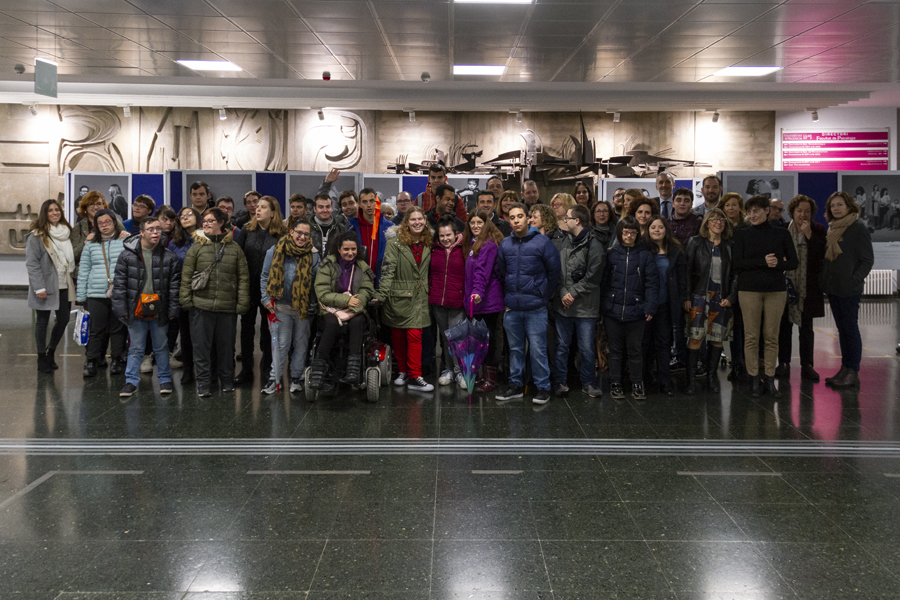