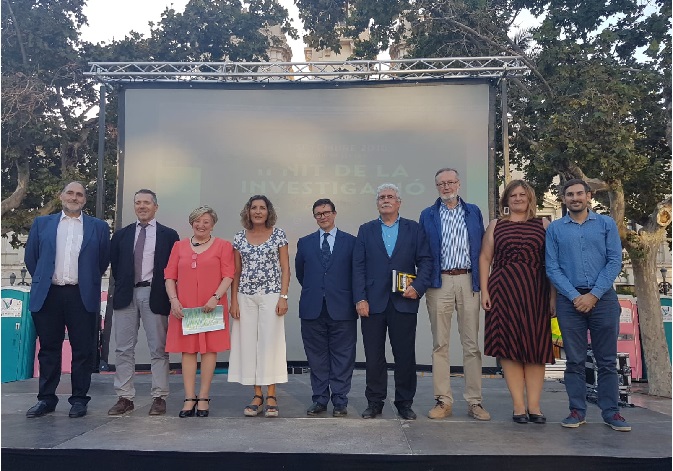 Workshops for Primary and Secondary school students; the show «Female scientists and artists», in which the role of women in research is claimed; or guided visits to the Science House of the CSIC, the Botanical Garden or the frescoes of the church of San Nicolás. These are some of the activities of the II European Researchers’ Night, which was held this Friday 28 between 4.30 and 10.30 pm at the Town Hall Square of València.

The event, with the motto Live the Science Square, has been organised by seven Valencian institutions and scientific entities, including the Universitat de València, and has been held on the occasion of the European Researchers’ Night, a project of the European Commission to bring to the citizenship the most human part of the Research and that has been held in 300 cities throughout the continent. All activities were open to the public, without prior registration.

The inauguration of Live the Science Square - II European Researchers’ Night took place at 6 pm. At the event, the researcher at the University of Valencia and INCLIVA Anna Lluch highlighted the festive atmosphere, “where researchers meet with people, to show that science is made by people”. María Dolores Real, Vice-rector for Innovation and Transfer of the University of Valencia, also attended the event and insisted on bringing science closer to people and on the importance of the role of women in research. In turn, the Vice-rector for Research at the University, Carlos Hermenegildo, recalled the need to “make visible science made by women and also those areas where women are not visible”.

Workshops on a variety of subjects for Primary and Secondary school students were held by research staff from the participating institutions. Thus, on the part of the university, a workshop has discovered how light pollutes, hosted by Joaquín Baixeras (Cavanilles Institute of Biodiversity and Evoutionary Biology), Enric Marco (Department of Astronomy and Astrophysics) and Ángel Morales (Department of Analytical Chemistry). Also, with Elena Estrelles, conservator of the seed bank of the Botanical Garden, and Isabel Martínez and Carmen Mansanet (collaborating biologists) a seed bank has been presented. Alejandra Soriano, María González, Raquel Galián and Alicia Forment, researchers from the Institute of Molecular Science of the UV explained to children how to make slime.

Other workshops have been how to learn to extract one’s own DNA, observe the microorganisms, know the fruit fly, enjoy the Soundcool workshop, learn the secrets of the operation of a port or the building of bridges, know more about the particles accelerator, as well as identify chemicals present in daily life.

Simultaneously with the workshops, the activity “the Science Wall” has been displayed, a signature book where the opinion of attendees on the importance of science has been collected in video format. After the workshops, the video “Observing the Universe with gravitational waves” has been screened, made by the Research team of the Universitat de València that is part of the LIGO-Virgo collaboration.

At 8.30 pm the “Female scientists and artists” show has begun, which included a series of monologues and performances. The show showcased very diverse scientific concepts such as quality and visual health, transgenic foods, neuronal connections in the human brain, colorectal cancer, life in Oceania and particle accelerators and colliders.

The evening has also highlighted the role of women in science and the importance of including the gender perspective in research, has addressed pseudosciences and ended with the initiative “Science in Parliament”, or how to strengthen scientific advice in the political decision making.

The II European Researchers Night has been organised by the Department of Equality of the City of Valencia, the Higher Council for Scientific Research (CSIC), the Foundation for the Promotion of Health and Biomedical Research of the Valencian Community (FISABIO), the Institute of Health Research (INCLIVA), the Universitat Politècnica de València (UPV), the University of Valencia (UV) and the company of the Scientific Park of the Miguel Hernández University of Elche El Caleidoscopio, and is part of the European Valencian Researchers’ Night.

In addition, other activities have been held in Valencia on Friday included in Live the Science Square. Thus, between 4.30 pm and 6.00 pm guided tours took place to San Nicolás, where the frescoes of the church can be contemplated and the restoration process by researchers at the UPV was explained. At the same time the UV Botanical Garden open day has been also enjoyed.

Between 5 pm and 7 pm, the CSIC Science House has held an open day and its permanent exhibition has been visited, a collection formed by thousands of copies of decals and sheets corresponding to the rock art of the Mediterranean Arc of the Iberian Peninsula, historical testimony of the first artistic manifestations of Humanity.

The activities program can be consulted here. 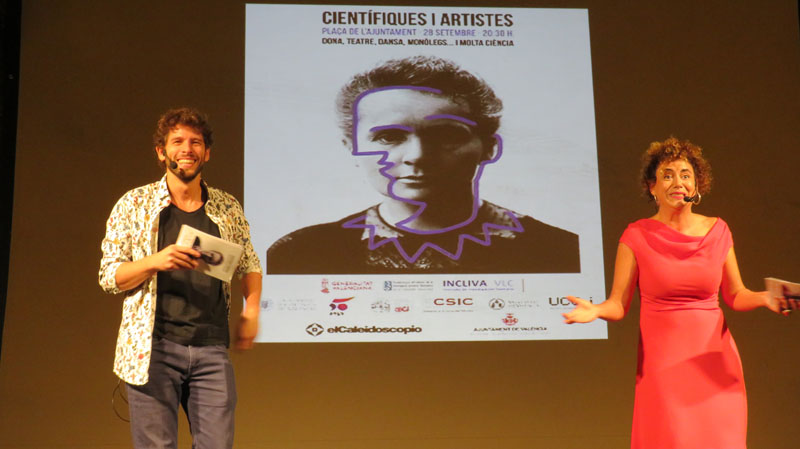