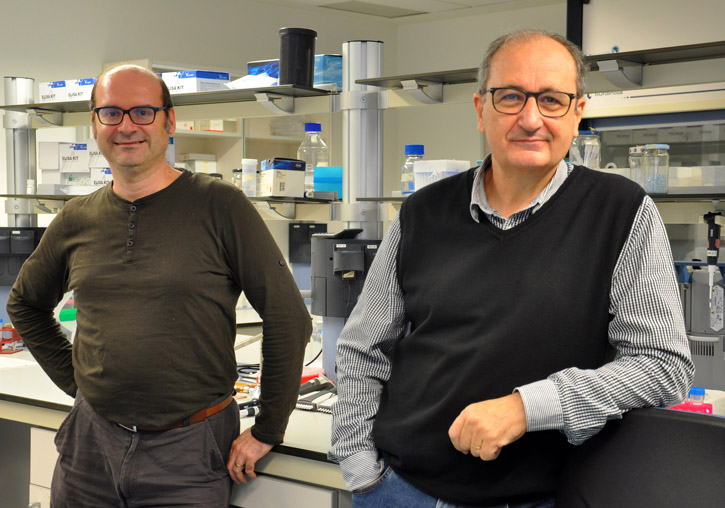 Vicente Pérez Brocal (left) and Andrés Moya, Fisabio-Salud Pública and CIBEResp researchers. Moya is also Professor of Genetics at the University of Valencia.

Since 2006, several studies have shown that morbid obesity is associated with impaired immediate and recent memory. Now, staff from the Girona Biomedical Research Institute (IDIBGI), the University of Valencia (UV) with the Genetics professor Andrés Moya, the Fisabio Foundation, the Pompeu Fabra University of Barcelona (UPF) and CIBEResp, have just published in the journal Cell Metabolism the results of a study that relates immediate and recent memory with the presence of certain intestinal bacteria (known globally as the intestinal microbiota).

“The study reveals interesting connections between the composition of the intestinal microbiota and cognitive performance, and contributes to a better understanding of the metabolic dialogue between our brain and the bacteria that live with us”, highlights José Manuel Fernández-Real, who leads the project and is Professor of Medicine at the University of Girona (UdG) and head of the Nutrition, Eumetabolism and Health Group at IDIBGI.

According to Andrés Moya, also a Fisabio-Salud Pública and CIBEResp researcher, “the results of this research have been related both to various cognitive tests and to the measurement of the volume of certain brain areas involved in memory, measured by magnetic resonance imaging”.

The study, «Obesity Impairs Short-Term and Working Memory through Gut Microbial Metabolism of Aromatic Amino Acids» has been registered as a European patent and has been carried out with a cohort of 130 volunteers, both obese and non-obese, whose intestinal microbiota has been analysed, among other variables.

In subsequent trials, Vicente Pérez Brocal (researcher at Fisabio-Salud Pública and CIBEResp) comments “a fecal microbiota transplant was carried out in 22 volunteers from the study cohort, 11 with low and 11 with high scores in the tests of memory, to microbiota-free mice. The objective was to assess its effect on the recent memory of rodents. Here we have been able to verify that the transplanted microbiota of patients with morbid obesity reduces the score in the memory tests of the mice”.

For Rafael Maldonado, from UPF, “the possibility of changing memory traits in mice by means of human microbiota transplantation highlights the potential interest in modifying the microbiota for therapeutic purposes in obese patients with cognitive alterations”.

Tryptophan is found in the bloodstream under normal conditions, an aromatic amino acid that is essential for the “synthesis” of neurotransmitters. This work has found that morbidly obese people, who had less recent memory, also had less tryptophan in their bloodstream. On the other hand, the production of some vitamins depends on the bacteria of the microbiota. People with obesity had certain bacteria that metabolised vitamin B1 in parallel with the decline in immediate and recent memory.

In reference to the hippocampus, it is already known that its size is related to the memory of the individual. The study found that obese people had a smaller hippocampus. In addition, it was found that the size of the hippocampus was associated with the presence of certain bacteria of the intestinal microbiota.

Since a relationship between diet and the presence of certain intestinal bacteria has been established, these results would allow the development of diets that can improve cognitive performance and memory, as well as the modification of the microbiota for therapeutic purposes.