The UV celebrates 125 years of the studies in Chemistry and awards its Medal to Prof. Fernando Sapiña

The Universitat de València celebrated this Tuesday 23rd of November, with a Solemn Academic Ceremony, the closing of the 125th anniversary commemorations of the studies in Chemistry in our University. During the event, the Medal of the Universitat was given posthumously to prof. Dr. Fernando Sapiña.

An academic retinue made up of professors and academic authorities started the closing Solemn Academic Ceremony of the celebrations of the one hundred and twenty-five years of the studies in Chemistry at the Universitat de València.

In his speech, Francisco Tomás noted that ‘university students and the Valencian society in the transition from century XIX to XX were aware of this phenomenon, and they understood that it would be necessary to train new generations with scientific knowledge and professional skills to make them profitable. Therefore, they had the happy initiative, in my opinion, to implement studies in Science, and more specifically in Chemistry, at the Universitat de València. For this reason, we celebrate this initiative of the academic authorities of the time, their farsightedness and their eagerness for service’.

As in every academic ceremony, this one featured a Master Class, given by Agustín Escardino, who was professor and vice-principal of the Universitat de València, honoured with the Medal of our Universitat.

Professor Escardino recalled the different sites of the former Faculty of Science, which began its activities in the historic site of the Universitat, on La Nau street. He recalled this way that a fire took place in the Chemistry laboratories on the 12th of May 1932 on the first floor of the building, affecting the science classrooms, the Natural History Museum, and the Astronomical Observatory. The Faculty of Science was moved in October 1944 to the building where nowadays is the Office of the Principal of the Universitat.

Increasing studies to Physical Sciences, Mathematical Sciences and Biological Sciences in that historic Faculty of Science meant moving the Faculty to the current Burjassot-Paterna Campus in the autumn of 1978.

The Master Class also included a review of the professional activities of graduates in Chemistry at the Universitat de València, as well as an overview through the changes in the curriculum of this discipline that celebrates 125 years of tradition in our Universitat.

Posthumous Medal of the Universitat to prof. Dr. Fernando Sapiña

Fernando Sapiña was a professor in the Department of Inorganic Chemistry and a researcher at the Institute of Material Science of the Universitat de València.

Professor Sapiña focused his research on new ways of synthesis of materials with controlled composition, microstructure and properties. He is known for being the inventor of the reverse spherification cooking technique, which was applied by El Bulli restaurant. Moreover, he was one of the driving forces of the Degree in Gastronomic Sciences at the Universitat de València, the only one in Spain which can be studied at a public university and at public prices. He also stood out for his contribution to the dissemination of science, directing collections of Publicacions de la Universitat de València, the publishing house of our Universitat which is celebrating its centenary.

‘His contribution to the creation of Expociencia will always be remembered. He was a good person, someone on who you could always rely’, recalled professor Juli Peretó.

During a prolonged applause from the audience, his wife, Encarna Coret, received this honour, which was awarded to him posthumously by the Government Council of the Universitat de València in 2019, from the hands of the principal Mª Vicenta Mestre.

The Faculty of Chemistry, a reference of the Universitat de València

The dean of the Faculty of Chemistry, in her speech, highlighted that the Universitat de València has trained professionals in the field of Valencian productive fabric, as well as the teaching and research staff in Chemistry in the Valencian Community, being one of the first faculties in Spain, oustanding at European level.

She also recalled the first graduate woman, in 1917, and the first female doctor in Chemistry, in 1957, underlining the evolution of studies over time, warning that ‘excessive competitiveness and excessive bureaucracy take time away from what is important’.

Professor Adela Mauri highlighted that the Faculty of Chemistry of the  Universitat de València contributes to improving the quality of life and its contribution to the progress of Humanity, warning against chemophobia and recognising the need to improve the dissemination of the contributions of Chemistry. Thus, she recalled the rigour and enthusiasm of professor Fernando Sapiña.

The principal of the Universitat de València pointed out the value of the results of the research carried out in the Faculty of Chemistry, as well as the fact that it is the first degree in Chemistry in Spain to have a European seal of quality, the result of a continuous effort of the teaching and research staff, and the administration and services of the Faculty.

‘Nowadays, our Faculty of Chemistry stands out for its initiative, including international double degree studies and modern postgraduate programmes covering all areas of chemistry’, the principal emphasised.

The principal Mª Vicenta Mestre also recalled the importance of the student body, ‘without students, there is no teaching’, she claimed, and she thanked the PDI and PAS (Teaching and Research, and Administration and Services staff) for their continuous work throughout the history of the faculties, first of Science and then of Chemistry, recalling the first full professors of that first Faculty.

In this way, she recalled professors Morera and Sierra, general secretaries respectively of the Faculty of Science and of the University during the Civil War, who suffered reprisals by the dictatorship, and professor Le Boucher, who was secretary of the Faculty, incorporated into the war front, where he died.

‘Today, as in the past, our University continues at the service of our people, science and knowledge. A commitment that we now reaffirm in this magnificent closing celebration of the 125th anniversary of the studies in Chemistry at the Universitat de València’. The Solemn Academic Ceremony ended with these words of the principal and the interpretation of the academic hymn Gaudeamus Igitur by the University Choral Society. 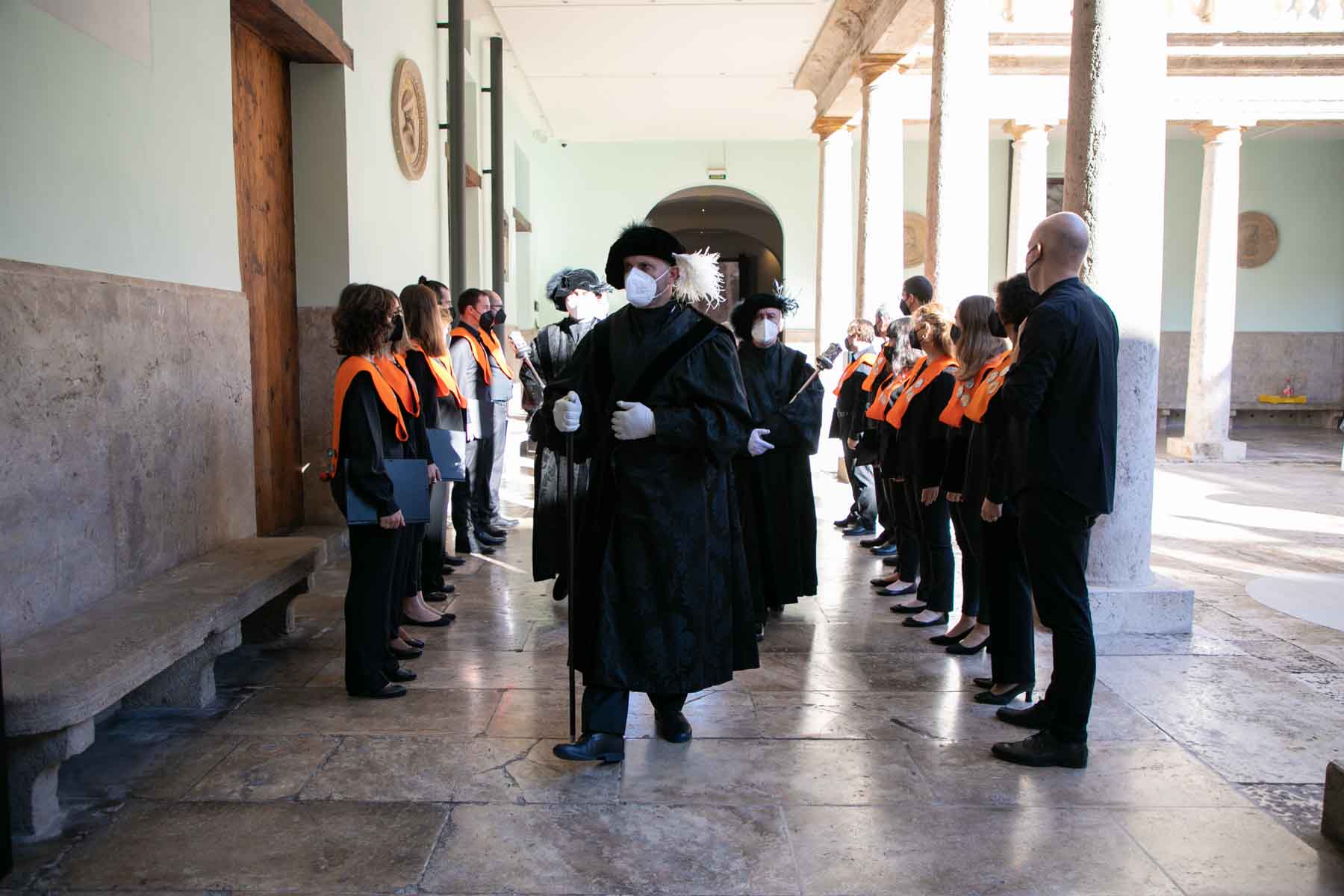 Lliurament dels premis Vicent Ventura a El Tempir i a Josep Ll. Viciano (2021), i a Maria Conca i Gustau Muñoz (2020) 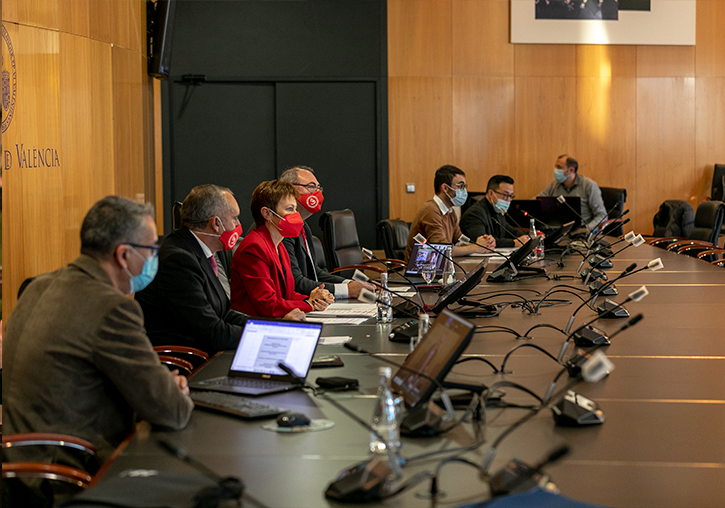