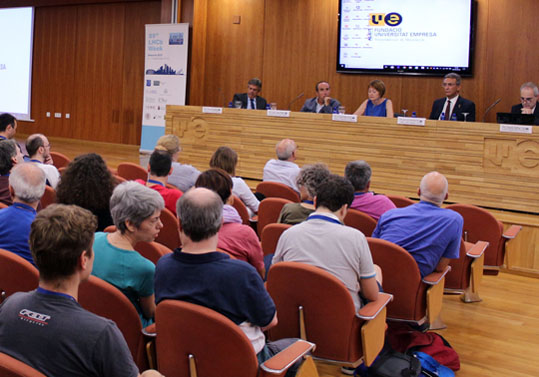 The search of a new physic is the reason of the existence of LHC, which is the highest and most powerful particle accelerator in the world. After discovering the Higgs’s Boson, scientists that collaborate in its experiments still search new particles. The detector LHCb is the most successful so far. The collaboration that works this experiment meets this week in Valencia to discuss two important questions.

The Principal of the Universitat de València, Mavi Mestre, joined the inauguration event.

On the one hand, the improvements of the detector will be installed in the next stop of the LHC and will increase its capabilities as of 2021. On the other hand, the anomalies registered by the LHCb question the main principles of Physics and point out the existence of new particles. The meeting, which includes 200 researchers of 16 countries, is organised by the Institute of Corpuscular Physics (IFIC), the Centre for Excellency Severo Ochoa and the Universitat de València (UV).

LHCb is one of the largest experiments of LHC. It is formed by enormous detectors placed in the 27 kilometre ring of the accelerator of the CERN where the beams of particles that travel almost at light speed collide with one another. Particularly, the LHCb is specialised in studying particles that contain quarks b (beauty) and quarks c (charm), both being fundamental constituents of the Universe. Thanks to this experiment, the experts can delve into flavour physics, which questions the properties of the three families of elemental articles to answer some of the most important questions of Physics such as why the Nature of matter prevails over its antimatter replica.

Hosting the meeting is a new challenge and recognition to the participation of IFIC in the experiment LHCb. It is a relatively recent participation formed by a very active group of young researchers,” stated the organiser of the conference, Fernando Martínez Vidal. “It is part of LHCb and organizing a yearly plenary meeting outside the CERN is a privilege, even more if we take into account the challenges that we are facing, the interesting recent results and the improvements of the detector. We expect that the discussions on these two aspects are very productive in such a special environment that the city of Valencia is offering.

New results will be studied in Valencia on some observed anomalies by the Scientifics of LHCb. Among the most expected ones, we can find certain types of disintegration of mesons B (particles formed by a quark and an antiquark) in which small differences in associated leptons have been observed. This challenges one of the pillars of the standard model, which is the theory that describes the elemental particles and its interactions: the lepton university. According to this, the leptons (a type of particles that include electrons, muons and taus) should be produced in the same quantities. Nonetheless, since 2015 the LHCb has obtained evidence of the existence of new particles that intervene in the process of “new physics”.

Another of the new expected results is linked to some angular distributions of the disintegrations of these mesons B and how the resulting particles are distributed in the space. Some anomalies have also been observed in the patrons stablished patrons of the standard model. In addition, new results are presented in Valencia on pentaquarks, a new way of gathering the quaks that form matter. These pentaquarks were observed for the first time in the LHCb in 2015. Now it is expected to know in detail its properties.

Another important part of the conference focuses on the improvements that will be installed during the next technical stop of LHC, which will take place at the end of the year. These improvements include the substitution of a large part of the subdetectors and the new and more advanced data-reading electronics allowing the development of a new system of trigger selection more flexible and fast that is based exclusively in software.

In this sense, apart from increasing the number of collisions that can be registered, new phenomena with long average of live (both known and unknown ones) will be able to be studied. This opens the door to studying black matter, a new type of matter that forms a 4th Universe but whose nature is completely unknown. These improvements will also allow carrying out specialised experiments simultaneously with marked targets. They are important to improve the comprehension of the strong interaction that is responsible of the formation of bound particles by quarks and extending the researching routes of the “new physic.”