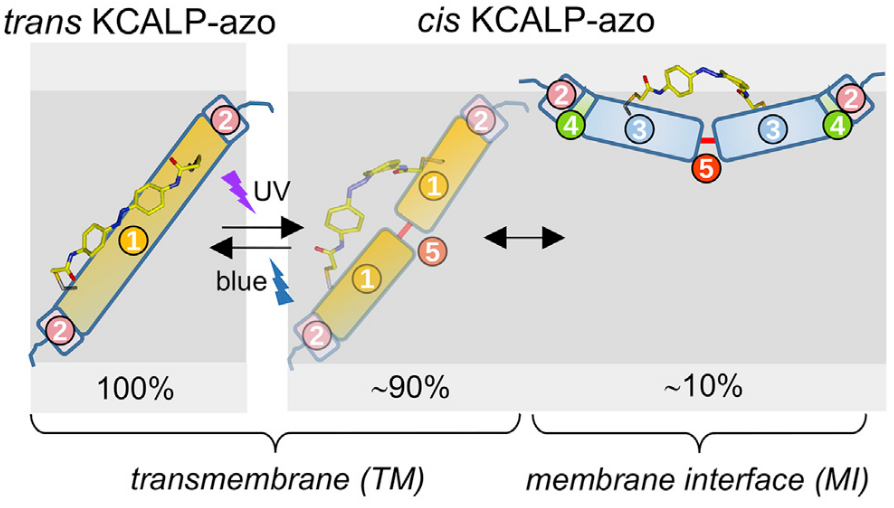 Highlights: We present an α-helical transmembrane peptide modified with a molecular photoswitch. The peptide exhibits reversible photocontrol of its membrane topology. A fraction moves to the membrane interface with UV and inserts back with blue light. This system will be useful to address the molecular mechanism for membrane insertion.

The spontaneous insertion of helical transmembrane (TM) polypeptides into lipid bilayers is driven by three sequential equilibria: solution-to-membrane interface (MI) partition, unstructured-to-helical folding, and MI-to-TM helix insertion. A bottleneck for understanding these three steps is the lack of experimental approaches to perturb membrane-bound hydrophobic polypeptides out of equilibrium rapidly and reversibly. Here, we report on a 24-residues-long hydrophobic α-helical polypeptide, covalently coupled to an azobenzene photoswitch (KCALP-azo), which displays a light-controllable TM/MI equilibrium in hydrated lipid bilayers. FTIR spectroscopy reveals that trans KCALP-azo folds as a TM α-helix (TM topology). After trans-to-cis photoisomerization of the azobenzene moiety with UV light (reversed with blue light), the helical structure of KCALP-azo is maintained, but its helix tilt increased from 32 ± 5° to 79 ± 8°, indication of a reversible TM-to-MI transition. Further analysis indicates that this transition is incomplete, with cis KCALP-azo existing in a 90% TM and 10% MI mixture.