A company linked to the Universitat de València, awarded in the Santander YUZZ 2016 programme 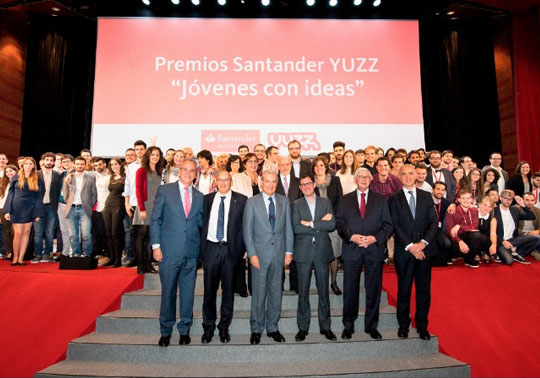 Pilar Asensi, who has developed a multiplatform in the cloud that enables the management of receipts with the mobile phone, will have the support and advice of experts in innovation of Banco Santander during four months in the City of the Santander Group.

With the awards ceremony, it ends the Santander YUZZ 2016 programme, which has supported and trained more than 1000 students who have presented 767 business projects in 48 high performance centres located all around Spain. In addition, it has been announced the opening of the call for 2017, which offers training sessions and spaces of coworking and advice on the part of experts to entrepreneurs in the whole territory. People interested can enrol free of charge in www.yuzz.org.

The best ideas Made in Spain

Nanocore Biotech, promoted by Yolanda González and Edurne Imbuluzqueta of the Santander YUZZ centre University of Navarra, has been chosen the best enterprising idea of the year and awarded with €30,000. These entrepreneurs, with a project focused on the area of the Children’s Oncology Group, have created some nanoparticles which function as intelligent capsules that direct the medicines used in chemotherapy directly to the tumour cells, avoiding the side effects that these medicines provoke in the rest of the body, an alternative treatment that could be carried out at home.

LightEnergy, developed by Luis Miguel Sanz and Miriam Rueda of the Santander YUZZ centre University of Valladolid, was awarded the second prize of €20,000 to continue developing alternative batteries to the ones made of lithium. This startup has created and patented a storage system of a lighter and more compact hydrogen which gives more autonomy to drones and other vehicles functioning with electric engines.

The third prize, of €10,000, has been granted to Nao Therapist, a therapeutic tool of movement rehabilitation for children created by José Carlos González and José Carlos Pulido from the Santander YUZZ centre University of Carlos III in Madrid. Thanks to the use of an interactive and autonomous robot which perceives the reactions of the child, Nao Therapist increased the motivation in the therapy and helps to reduce the rehabilitation time.

The best three entrepreneurs have been chosen among the 48 winners of each Santander YUZZ centre of the country, who have just come back from a trip to Silicon Valley, California, as a part of the programme. The jury who selected the best projects was integrated by the representatives of Banco Santander, CISE, SECOT and other collaborative entities.

The company Sadvia, of the entrepreneurs Matilde Durán and Sofía Mendes, has been awarded the prize of best initiative promoted by women. Thanks to the collaboration of the E&Y Foundation, this startup of the Santander YUZZ centre Santiago for the scientific consultancy to companies in need of innovation, scientific and technological solutions, will be helped during various months by experts of the E&Y and will be given €20,000 to continue developing its business.

More than 1000 places for entrepreneurs

The director of the CISE, Federico Gutiérrez-Solana, took advantage of the closing and the awards ceremony of this seventh edition to inform that in the edition of 2017 there will be more than 50 appointed centres, more than €250,000 in prizes and that it is going to start the internalisation of Santander YUZZ with the creation of the first centre in Argentina.

The period for the reception of projects of young people aged between 18 and 31 years old who would like to develop innovative ideas will be opened, free of charge, until 2 December in www.yuzz.org