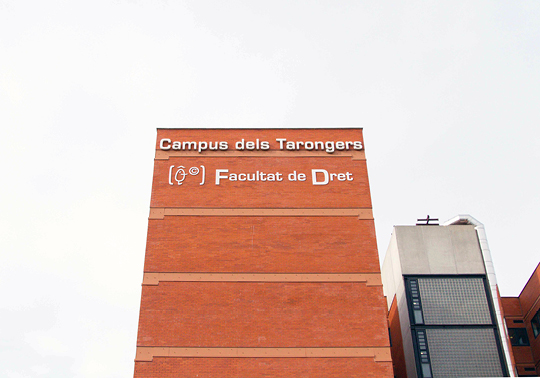 The Faculty of Law hosts on Wednesday 2 “Jurista en valencià” (Jurist in Valencian), a formative itinerary targeted to the students of the centre with the aim of encouraging and strengthening the use of the native language in the legal field. The event is part of a session that will analyse the power and opportunities of the Valencian language in law, in administration and in higher education, and it will be opened by the principal of the UV, Esteban Morcillo, and by the provincial counsellor for Justice, Gabriela Bravo.

Jurista en valencià is an initiative boost by the Institutional Chair for Valencian Floral Law and the Faculty of Law of the UV, with the aim of establishing a formative itinerary that allows the exercise of legal practice in the native language for the graduate student.

The proposal, coordinated by Javier Palao and Lourdes Ferrando, will be presented at the Assembly Hall of the Faculty of Law at 13:30 hours. The project expects the Valencian language to be a communication tool in the field of law. “This new formative itinerary could have an impact on the students or on professionals in terms of the recognition of qualifications, competitions, transfers, access to places or public examinations”, highlights Javier Palao.

“The idea is that people who work at courts, notaries, lawyers, from the public and private sector, have a higher formation in Valencian language, thanks to this itinerary. That any citizen could, in an administration office window or in an office, or in a court, find people competent in Valencian language, explains Palao.

To carry forward this proposal, it has been presented the creation of a work commission with three sub-commissions with about 25 and 27 members and an external advisory committee.

Jurista en valencià starts with the analysis and knowledge of the areas with languages in contact. In this way, areas of the linguistic domain, bilingual autonomous communities from the Spanish state or different countries with bilingual or trilingual models.

The inaugural conference, carried out by Rubén Trenzano (general manager of Language Policy), will be about the Llei d’Ús i Ensenyament del Valencià (Law for the use and teaching of the Valencian language), its application in the field of right and prospects for reforming.

The session “Valencian language in the field of law: realities and opportunities” is coordinated by Vicent Tasa Fuster and Francisco Javier Palao Gil, and has the collaboration of the Conselleria de Transparencia, Responsabilitat Social, Participació i Cooperació; Conselleria de Justicia, Administració Pública, Reformes Democràtiques i Llibertats Públiques; and Consellería d’Educació, Investigació, Cultura i Esport.