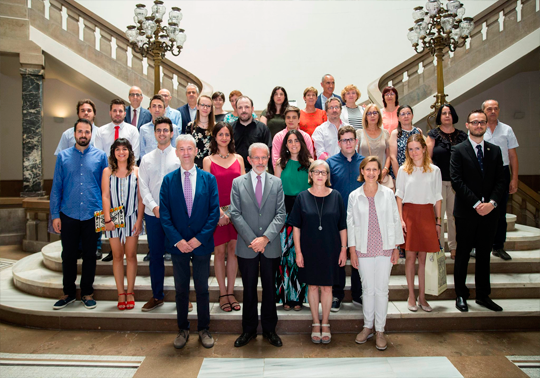 Twelve graduates of the Universitat de València receive this year the national prize to the best academic record which is awarded by the Minister of Education, Culture and Sports. The Principal of the Universitat de València, Esteban Morcillo; the vice-principal of Studies and Language Policy, Isabel Vázquez; and the general secretary, María José Añón, have welcomed this Friday the awarded students in an event celebrated in the Assembly Hall of the Office of the Principal.

It relates to the national awards of university education which correspond to the academic year 2012-2013 and that stablishes three categories: first, second and third prizes. The awards were called on May 2016 and have been published recently. The best academic records of the UV have reached most areas of expertise that this entity provides. There are students of social sciences, humanities, sciences and engineering.

During the event, the prizes for the best academic record of the first year of degree in the academic year 2015-2016 have been also awarded. The prize of the Sciences, Engineering and Architecture field has been given to Jorge Juan Baeza, who studies Physics; the one for the Health Sciences has gone for Sergio Pérez, student of Psychology; the one for Arts and Humanities has been given to Raúl Rodríguez, student of Translation and Interlinguistic Mediation (French); and the prize of the Social and Legal Sciences has been for Alessandra Bimbi, student of Criminology.

The same foundation awards the prizes for the best academic record for graduates of the 2015-2016 academic year. In this occasion, the awards Óscar Roldan, student of Mathematics; Maria Botella, of Psychology; Marc Borrás, student of Philosophy and Salvador Jesús Tormo, of Law, have been awarded.