Unisocietat will offer conferences on March in 8 different Valencian towns 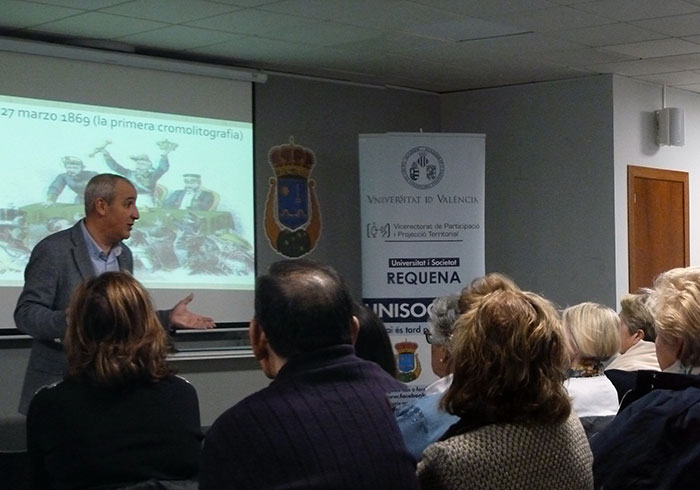 During March, a total of 8 professors from the Universitat de València will impart conferences in Gandia, Requena, Benetússer, Quart de Poblet, Paterna, La Eliana, Alzira and Massamagrell. This activity, which is supplementary to the course of Unisocietat, is free and opened to the rest of local society.

The first talks started on Wednesday 7 of March in Gandia (la Safor) and Benetússer (Horta Sud). Professor Rafael Gil (History of Art) offered at the Gandia International Centre a conference entitled Memory of the Modern Times.  The heritage collection of the Provincial Government of Valencia. Professor Pura Peris (Financial Law and Legal History) was present at the City Council of Benetússer. She explained all you wanted to know on taxes and never dared to ask.

On March 13, Juan Francisco Pardo (Modern and Contemporary History) will offer a session on the Moors of the Kingdom of Valencia (1525-1609).

On March 14, Professor José Cantó (Experimental and Social Sciences didactics) visits Quart de Poblet (Horta Sud), where he will give the conference the danger of pseudoscience: horoscopes, Astrology, and other lies.

On March 22, the conferences arrive to the Horta Nord, particularly to Paterna and Massamagrell. Professor Ángeles Solanes (Law, Moral and Political Legal Philosophy) will focus on what the rule of law is for? at the Social Centre Campamento in Paterna. Professor Màrius V. Fuentes (Pharmacy, Pharmaceutical Technology and Parasitology) will analyse at the Massamagrell Cultural Centre the parasites of food, which are as unknown as harmful.

Finally, Jorge Ramos (Modern and Contemporary History) will give the conference understanding Palestine and Israel from an educational perspective on March 28 at the Adult Teaching Centre of La Eliana.

It is not required to be registered in the Universitat i Societat (Unisocietat) programme to attend the conferences, as they are opened to the general public. It is an advance that students from Unisocietat will be able to enjoy along the academic course. It is a way to contribute to the education of the Valencian society and encourage the citizens to join this university programme, which counts with more than 1500 students within all its offices in the course 2017-2018.

The Conference of Unisocietat will continue on a monthly basis throughout the current academic course up to June. It is organized by the Office of the Vice-Principal for Territorial Projection and Participation with the collaboration of the city councils of Alzira, Benetússer, Cullera, La Eliana, Gandia, Massamagrell, Ontinyent, Paterna, Quart de Poblet, Requena and Bétera; and the financial support of Caixa Popular, Caixa Ontinyent (Vall d’Albaida) and Banco Santander (la Safor).