The UV Senate approves the management report of the Principal, who claims again a reduction in the tuition fees 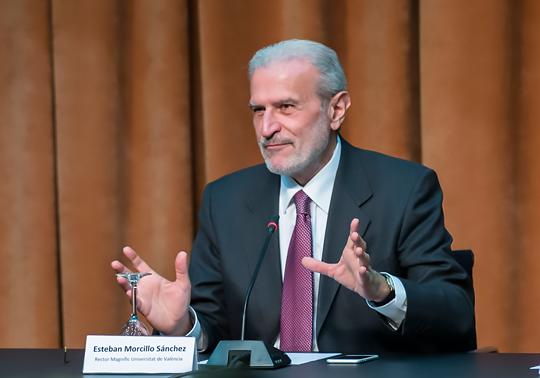 The Senate of the Universitat de València approved on Monday the management report presented by the Principal, Esteban Morcillo, who claims again a reduction in the fees and an improvement of the Valencian university system funding. The UV Senate has also approved the 2018 Operational Plan, which has been presented by the Vice-Principal for Economics, Infrastructures and Information Technologies, Juan Luis Gandía.

In his report, the Principal has presented the large numbers of the Universitat de València, which remains the reference University of the Valencian Public higher education System. It is the university with more students as well as the one that manages the most complete offer of degrees and postgraduates. It also stands out in research and its publication in prestigious magazines represent 42.3% of all the Valencian universities.

Among other aspects, Esteban Morcillo has pointed out that UV is the second university in Europe when it comes to welcome Erasmus students and the first face-to-face university in hosting students with disabilities.

According to him, the most worrying aspect is the price of fees since it endangers the universalization of the higher education. However, he has expressed confidence in a price drop for the following academic years which will have to be combined with a fair grant policy.

Esteban Morcillo has expressed satisfaction for the approved announcement for the promotion and stabilisation of the teaching staff after as well as for the recognition of the PAS professional career.

The complete Principal’s report can be checked clicking here.

For his part, the Vice-Principal for Economics, Infrastructures and Information Technologies, Juan Luis Gandía, has presented the Operational Plan 2018, which is a document that orientates the university general policy and the budget of 2018. In the general macroeconomic context, Gandía has explained the favourable prospects of growth of the Spanish economy, but also the persistent problems of indebtedness. In the Valencian case, there is a problem of underfunding and this directly affects the situation of universities.

Juan Luis Gandía has pointed out the debt numbers of the Valencian Government with the Universitat de València which, regardless of the so-called ‘ancient debt’, are situated in two postponed monthly payment of the regular subsidy (38 millions), apart from 22.40 million of other concepts. Other public and private entities have a debt of 26.20 million euro.

In the speaking time, Nèstor Beltrán, from BEA, has criticised the way in which the occupation of the building of the Lluís Vives Hall of Residence during a month and a half has been managed. The Dean of Philosophy, Jesús Alcolea, has requested support for the manifestos approved in the las Governing Council Session to support the Philosophy and Mathematics subjects in the Secondary Education. Celedonia Igual has demanded the continuation of the master’s degree in ageing policies.