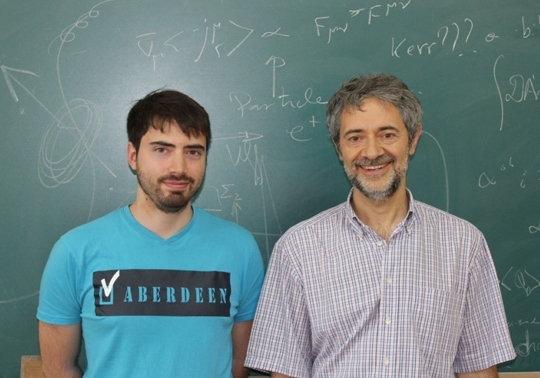 The Gravity Research Foundation has just presented its first prize of the annual competition of research trials to three Spanish physics, José Navarro-Salas and Adrián de Río Vega, from the Institute of Corpuscular Physics (IFIC, Universitat de València-CSIC) and Iván Agulló, from the Louisiana State University. Since the creation of this institution in 1949, it is the first time that the prize goes to scientifics of a Spanish institution.

Among the winners of this prize, it is important to highlight famous scientifics like Stephen Hawking and Roger Penrose, as well as some Nobel prize-winners for Physics such as George Smoot, Gerard't Hooft, Frank Wilczek or François Englert. With this prize, the Gravity Research Foundation tries to promote the research about gravity, one of the four fundamental forces of the nature.

The first prize.winner work in the 2017 edition of the competition, “Gravity and handedness of photons”, suggests that the gravity would have another effect on light apart from the ones we know. According to the Einstein’s Theory of General Relativity, it is known that a gravitational field modifies the trajectory as well as the frequency of the light. The rewarded work considers a new effect: the polarisation state of light could be altered by gravity.

The light is an electromagnetic wave, in other words, fluctuations of the electric and magnetic fields propagated in space. These fluctuations are perpendicular to the direction of propagation; and applying certain filters, the direction of fluctuation can be conducted, what it means, “they can be polarised”. Furthermore, the quantum physics shows us that the light is composed by several “parcels” with a minimum quantity of energy that act like particles (photons) and also can be characterised by their polarisation. Spanish researchers suggest that the gravity can distinguish subtly the two polarisations of the photons (“handedness”) throughout their propagation.

When the light travels through space, it is impossible to identify the electric and magnetic fields. For physics, this is a fundamental symmetry that is kept in all situations.  As a consequence, the polarisation of the photons would not be altered during its trip. But, the Spanish researchers have observed the situation from the quantum physics’ point of view, and there are surprises here. “When combining the quantum physics laws that control the behaviour of the photons and the Einstein’s General Relativity, there is a quantum breakdown of this symmetry”, explains José Navarro-Salas, full university professor of the Department of Theoretical Physics of the Universitat de València and the Institute of Corpuscular Physics (IFIC).

This is the first time that this symmetry is considered to be broken in gravitational fields. So, the innovation of the work and its recognition stem from this. The research trial also studies the consequences of this symmetry breakdown. In extreme situations in the cosmos, such as the collapse of a star in a black hole or in the fusion of two black holes, the gravity could change the polarisation of the photons that comprise the light that will go ahead their surroundings. The involvements for physics are very significant.

The gravitational waves detected for the first time by the LIGO experiment in 2016 point precisely to the fusion of two black holes. Their intense and special gravitational camp suggest studying their influence on the polarisation of the photons. And these changes in the polarisation of the photons due to the gravity is something that could affect the studies of the Planck satellite, which observes the first light of the Universe. Furthermore, according to Adrián del Río, “this effect would open the door to new physical phenomena such as the creation of photons with different polarisation in these scenarios, similar to the Hawking radiation that would emit a black hole”. The Spanish researchers, who have published an article about the topic in Physical Review Letters, explore the experimental implementations of their work.

The Gravity Research Foundation Prizes were established in 1949 by the entrepreneur and engineer of MIT, Roger Babson, to encourage the research about gravity. The list of the prize-winners during 70 years is too long, and it includes the most prestigious physicists: from Steven Hawking (winner in 1971 with a dissertation about black holes) and Roger Penrose (winner in 1975 with a research trial about graviton) to John Ellis, theoretical physicist of CERN (winner in 1999). Iván Agulló, who did his doctoral thesis under the supervision of José Navarro-Salas, obtained this prize in 2011 together with Leonard Parker for a work about the influence of the quantum mechanics in the fluctuations of the temperature of the cosmic microwave background of the Universe.