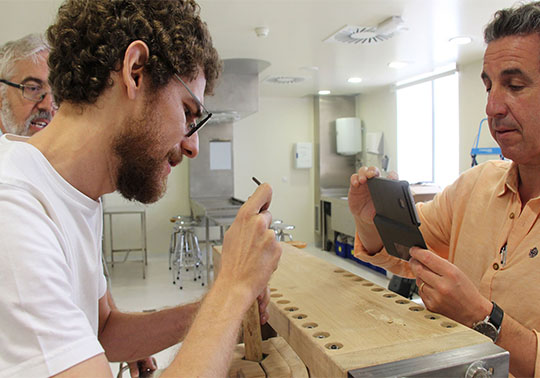 Antonio Silvestre, adjunct lecturer in the Faculty and head of the Department of Orthopaedic and Traumatology Surgery of the Hospital Clínico of València- INCLIVA-UV, and the Universitat Politècnica de València have registered a patent of a prosthesis implant which improves the security and eases the surgical intervention. This design is being used for hip, knee, elbow and shoulder prosthesis and also for nails to reconstruct fractures or in external prosthesis posts after amputation

The implant is highlighted due to its new design, formed of several expandable units which are produced by polymers which are loosely inserted in the bone. This eases both its implantation and its extraction. Besides, due to its geometry can be personalised or adapted to every patient’s needs.

‘With the developed technique, the processes are less traumatic. They provide the surgeon more control over the surgery, so we expect to affect in a positive way to the patient’s recovery.

Most of the current implants are formed of one piece which is inserted in the medullar channel by percussion (press-fit) or blowing with a hammer. It is a traumatic process which sometimes provokes the bone’s shattering. Furthermore, the rigidity of these implants causes the loss of bone tissue (osteoporosis by disuse). Sometimes, when it is necessary to remove an osseointegrated implant, a controlled fracture (enlarged osteotomy) should be used in more than 50% of the cases.

‘The system we have devised reduces the main drawbacks of the current implants: it is inserted loosely into the bone, prestressed by expanding and fixed by friction, which allows to control the stresses in the bone. This is especially important when the bone is of low quality’, says José Albelda, from the Centre for Research in Mechanical Engineering (CIMM) at the Universitat Politècnica de València. Subsequently, the osseointegration of the implant takes place in the bone, being long-term fixed. Besides, being made of polymers ‘facilitates the removal of the implant reducing the risk of bone fracture,’ said the researcher.

Other important aspect of the implant is its stiffness, similar to the one of a cortical bone. In this way, ‘there are obtained distributions and levels of stresses in the implanted bone that are more similar to those of the bone without implant. Consequently it is expected to improve the process of bone remodelling’ explains José Expósito, Ph.D. in Technologies for Health and Wellness of the Universitat Politècnica de València.

Applications of the implants

In the case of using the implant designed by the Valencian team as a nail for fractures, the characteristic advantage is that it avoids the difficulty of machining in the bone holes for the use of transversal fixing screws. It also improves the stability of the fracture are by pressing the different pieces between them.

Finally, when it is used in femur or humerus amputations it can be combined with a percutaneous collar - also designed by the researchers of INCLIVA-UV and UPV -, designed to improve the anchoring of adjacent tissues, which favours the creation of a protective barrier against infections.