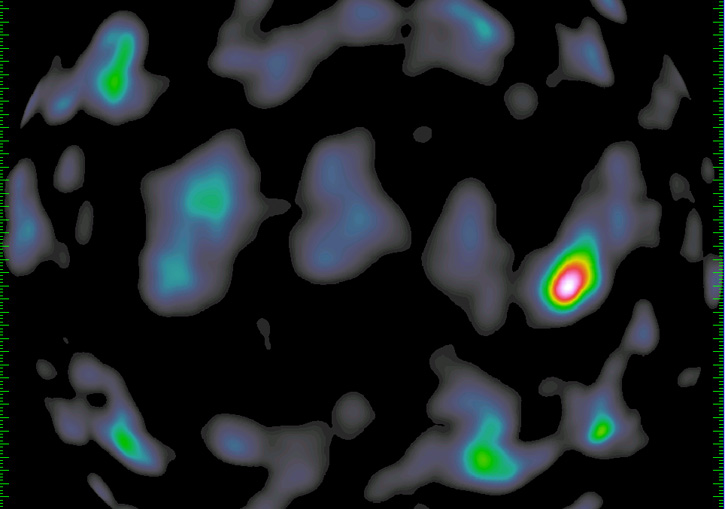 An international research in which the University of Valencia (UV) participates has demonstrated at the millisecond level the correlation between the high energy gamma burst and the development of thunderstorms. These are two violent atmospheric phenomena observed from the International Space Station (ISS) and in which the ultraviolet emission has been captured for the first time. The article has been published in Science.

“It is the association between the Terrestrial Gamma Ray Flashes (TGF), undoubtedly the most violent phenomena of the Earth’s atmosphere, with the so-called Transient Luminous Events (TLE) observed in the optic and for the first time also in the ultraviolet”, highlighted Víctor Reglero, director of the Image Processing Laboratory (IPL) of the University of Valencia and third author of the article “A terrestrial gamma-ray flash and ionospheric ultraviolet emissions powered by lightning”. In the now published research, in addition to the UV, the Technical University of Denmark, the University of Bergen and the Italian National Institute of Astrophysics have participated.

Hitherto there were theories that indicated this correlation, based on observations from satellites or from Earth but not simultaneous. Establishing this relationship has been possible for the first time by having an ASIM instrumental set, which covers the hardest gamma rays from the optician through the ultraviolet spectrum. The results show that the flash of terrestrial gamma rays (TGF) was produced by high-energy fields produced just before a lightning bolt within the thunderstorm cloud that occurs milliseconds after the start of the lightning, key to the formation of the TGF. The subsequent lightning released an electromagnetic pulse, which induced an ultraviolet emission (ELVE) visible above the storm and shaped like a dark disk of radiation that reaches the ionosphere.

These results help to reveal the process by which the flashes of terrestrial gamma rays (TGF) are generated from thunderstorms, and the connection between gamma rays, electromagnetic phenomena in the upper part of the atmosphere and the radiation produced by storms.

“The correlation is not only temporary, but also in the position of events in the atmosphere thanks to the Imaging Gamma system developed by the UV and INTA teams”, said Víctor Reglero, also a professor in the Department of Astronomy and Astrophysics of the University of Valencia, who states that these are “new and little known phenomena that show the most violent aspects of the Earth’s atmosphere and have a potential impact on the Global Electric Circuit of the Earth”.

ASIM (The Atmosphere Space Interactions Monitor) is an instrument created by the European Space Agency (ESA) and NASA, which has been operating for a year and a half from the ISS. It was developed through an international project in which the University of Valencia, the Technical University of Denmark and the University of Bergen collaborated between 2005 and 2018. With its implementation it was intended to detect TGF, very violent discharges of High Energy X and Gamma of very short duration (0.001 second) and very scarce (one or two per day are detected) comparing to normal rays that are between 1-4 million per day.

Although the scientific community knows well and is familiar with the electric rays that break the sky under storm clouds, other types of light phenomena are known to occur above storm clouds in the upper atmosphere of the Land. ELVEs, a type of this phenomenon, are expanding ultraviolet and optical emission waves in the ionosphere above the storm.

The team of the Image Processing Laboratory of the University of Valencia that has participated in the article of Science is formed, in addition to Víctor Reglero, by Javier Navarro-González, Paul H. Connell and Chris J. Eyles.

Flash of an Earth gamma ray located on Earth, captured from the International Space Station. It is the first image of the Earth with gamma rays, taken on June 27, 2018. The colour scale is logarithmic, so the difference between white and blue is 1,000,000. The probability that the TGF is in the target position is a million times higher than other places in the image. Between June 2018 and currently ASIM has taken 54 images of TGF on Earth in the first year of operations. Photo: ASIM in the ISS.