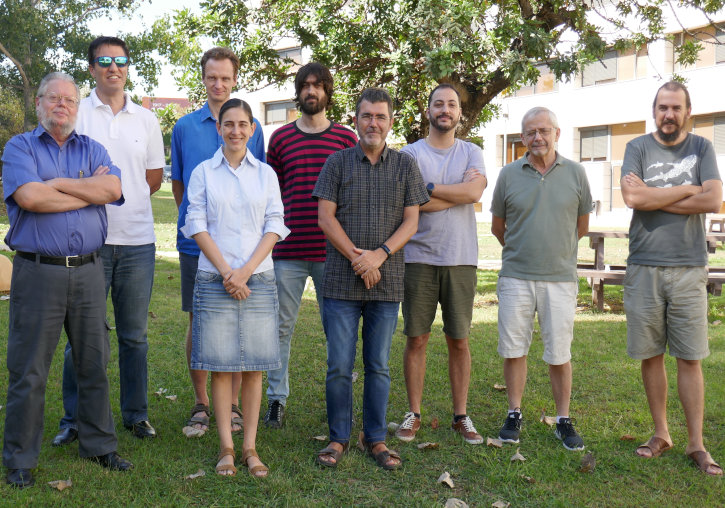 Part of Virgo’s team at the University of Valencia.

The University of Valencia has participated in the discovery of gravitational waves caused by the fusion of a very massive neutron star binary system. Specifically, on April 25, 2019, the network of gravitational wave detectors formed by the Advanced LIGO (USA) detectors and the European Advanced Virgo detectors (in Italy) found a signal they called GW190425. In this discovery, the results of which will be published in Astrophysical Journal Letters, the University of Valencia, which is one of the Virgo Collaboration members, collaborates.

GW190425 was detected at 08:18:05 UTC (Coordinated Universal Time) and approximately 40 minutes later an alert was sent to launch follow-up observations by other telescopes. This is the second observation of a gravitational wave consistent with the fusion of a binary neutron star system after the signal GW170817.

It is estimated that the source of GW190425 is at a distance of 500 million light-years from Earth. The total mass is greater than that of any known neutron star binary system, which has astrophysical implications on the formation of this system. José Antonio Font, coordinator of Virgo’s group at the University of Valencia, states that “if it were a binary system of neutron stars, this discovery would set a new record in the total mass of such systems. Its high total mass, about 3.4 times the mass of the Sun, is greater than that of any binary system of neutron stars detected by radio-telescopes in our Galaxy”.

According to the research team, this is a unique case and poses new challenges to explain the training channels of binary systems of such massive neutron stars. In addition to the high mass, since it has no electromagnetic counterpart, it cannot be ruled out that one or even the two objects is a black hole. According to Font, “with this system we could enter the so-called mass gap between neutron stars and black holes, a diffuse interval between 2.5 and 5 solar masses where neither neutron stars nor black holes seem to inhabit”.

The Virgo group of the University of Valencia, coordinated by José Antonio Font, is formed by researchers from the department of Astronomy and Astrophysics José Mª Ibáñez, Pablo Cerdá-Durán, Miguel Angel Aloy, Martin Obergaulinger and PhD students Fabrizio di Giovanni and Miquel Llorens-Monteagudo. Also Isabel Cordero-Carrión and Antonio Marquina, from the Department of Mathematics; and postdoctoral researchers Alejandro Torres-Forne, currently at the Max Planck Institute for Gravitational Physics (Germany) and Nicolas Sanchis-Gual, currently at the Centre for Astrophysics and Gravitation of the University of Lisbon.

“The Virgo group of the University has a wide tradition in numerical modelling of this type of astrophysical systems. In this discovery the group has contributed in aspects related to the discussion and presentation of the results that appear in the publication”, concrete José Antonio Font.

Font concludes that “this is certainly the kind of events that make gravitational wave astronomy such an exciting field of research”.

The Virgo Collaboration currently consists of more than 500 experts from 100 institutions and 11 countries, including Belgium, France, Germany, Hungary, Italy, the Netherlands, Poland and Spain.