The new European Strategy of Astroparticle Physics supports KM3NeT and NEXT experiments, in which IFIC is involved 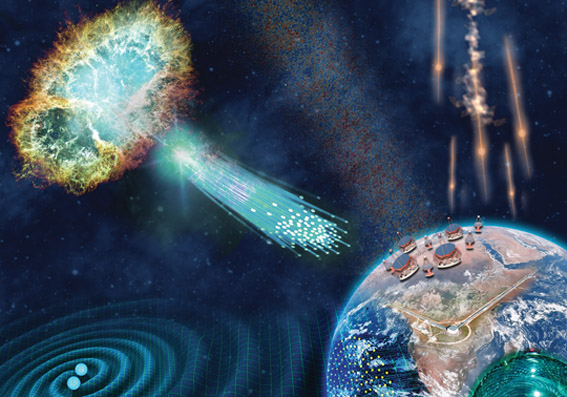 The Astroparticle Physics European Coordination (APPEC) has presented a plan for the next decade. APPEC combines financial entities and research institutions from 14 countries which are involved in this field of research saddled between Astrophysics, Particle Physics and Cosmology. The new European Strategy of Astroparticle Physics (2017-2026) devises recommendations in fields such as Multi-messenger Astronomy, Neutrino Physics, the study of dark matter and energy, and the evolution of the Universe. KM3NeT and NEXT are two experiments among those supported by APPEC. On the one hand, KM3Net counts with an important participation of the Institute of Corpuscular Physics (IFIC, CSIC-Universitat de València). On the other hand, NEXT is led by IFIC at the Cafranc Underground Laboratory.

This is the second strategy initiated by APPEC since the one endorsed in 2011.  During this period of time, important discoveries have occurred such as detecting for the first time high-energy cosmic neutrinos and observing gravitational waves.  In addition, three Nobel Prize for Physics have been awarded in this area: Saul Perlmutter, Brian P. Schmidt y Adam G. Riess for discovering the accelerated expansion of the universe (2011); Takaaki Kajita y Arthur B. McDonald for discovering the neutrino oscillation (2015) and Rainer Weiss, Barry Barish y Kip Thorne for detecting gravitational waves (2017).

This strategy stablishes 21 strategies in three key areas of research: studying simultaneously cosmic messengers (cosmic ray, electromagnetic radiation, neutrinos and gravitational waves) emitted by the most powerful sources of energy in the Universe (known as the multi-messenger approach); studying in-depth the most mysterious elementary particle, the neutrino,  and the exploration of the “dark side” of the Universe (formed by dark matter and dark energy), alongside with the study of the evolution of the Cosmos through Bing Bang (Cosmology and cosmic microwave background).

The document recommends aligning European funding with projects that are listed in the European Strategy Forum on Research Infrastructure (ESFRI) such as CTA, the gamma rays observatory in the Northern Hemisphere Array that is being built in La Palma; and KM3NeT, that will be the biggest high-energy neutrino telescope in this part of the World.  In this sense, APPEC recommends building by 2020 a large telescope with a high angular resolution for High-energy Neutrinos Astronomy, and a smaller detector optimised for low-energy neutrinos so that the difference in mass among different types of neutrinos can be studied.

IFIC makes an important contribution to KM3NeT: it is responsible of the electronics that processes the photomultiplier signals in the lines of detection (that are being installed in French and Italian coasts), it coordinates the temporary calibration of the detector, searches neutrinos sources and dark matter, and studies the mass hierarchy among neutrinos.

In the field dedicated to study the properties of neutrinos (such as finding out if they are their own antiparticle), this new strategy also supports the current generation of experiments that are being developed in Europe in order to find out evidence of this feature, the double-beta disintegration without neutrinos.  Among the most competitive European experiments in this field across the World, APPEC highlights NEXT. This is an IFIC-led experiment that uses xenon gasses in a high pressure chamber and whose first phase is currently taking place at the Cafranc Underground Laboratory.  The strategy considered for the following years is key to decide which technology will be used in next-generation experiments to resolve this issue.

In terms of experiments that study neutrino oscillations, this strategy supports the European participation in the most important projects in this field such as DUNE (USA), Hiper-Kamiokande (Japan) and JUNO (China).  IFIC participates in two of them, following a theory-based and practical approach.  Accordingly, APPEC also supports an ambitious theoretical research programme in the Astroparticle Physics field, in which IFIC has a vast experience.  It also recognises that a joint collaboration among organizations such as ESA, CERN and ESO is necessary.

This new European Strategy of Astroparticle Physics (2017-2026) is a result of contributions from APPEC’s Scientific Advisory Committee, the funding agencies and the scientific community in a meeting hold in Paris in autumn 2016 by APPEC’s General Assembly. This document was officially revealed on Tuesday 9th of January in an event in Brussels. Robert Jan Smits, Director-General of DG Research and Innovation of the European Council, was present at this event.