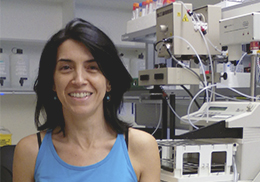 A research team of the UV and the Heinrich-Heine Universität (Düsseldorf, Germany) has just identified a new function for the Dom34 protein: the enzyme synthesis for the formation of glycoprotreins of the cellular wall of the ‘Candida albicans’ yeast. It is a possible target cell for therapies to face candidiasis, a human pathology with an increasing incidence in hospital-acquired infections. The work has been published in ‘PLOS Genetics.

The Dom34 protein is known for its function in the process of ribosome general recycling for the synthesis of proteins in the cell. However, with this work researchers have discovered that Dom34 is also necessary to synthesize enzymes for the formation of glycoprotein (molecule made of one protein and one or several carbohydrates) in the cellular wall of ‘Candida albicans’, a pathogenic human yeast with an increasing incidence in hospital-acquired infections. This cellular wall is the essential basis for Candida albicans’ to survive and proliferate, causing a frequent and alarming pathology: candidiasis.

“Although most of the candidiasis infections are treatable, complications can get to be serious in certain population; is the case of immune deficiency, such as AIDS, or organ transplantation, where treatments can not work normally. Nowadays, completely effective therapies do not exist”, says Paula Alepuz (Universitat de València), responsible for the Spanish collaboration in the project.

In the study published in the ‘PLOS Biology’ magazine it is confirmed that the Dom34 protein is able to recognize and join the mRNA (messenger of ribonucleic acid) product of the expression of encoder genes for glycation of proteins enzymes. The junction of Dom34 protein to this mRNA cause its translation and, therefore, the synthesis of such enzymes. The production of glycoprotreins of cellular wall is very important for the resistance of ‘Candida’ to the host defence. For this reason, the study opens new ways to research and search of new therapies against candidiasis, whose constant increase is being a serious problem in hospitals.

The involvement of UV is focused on the quantitative study of the translation process, that is to say, when genetic information transcribed in mRNA is going to be used to synthesize the protein. Paula Alepuz co-leads, with José Enrique Pérez Ortín, the research group GFL (Yeasts Functional Genomics), from the Department of Biochemistry and Molecular Biology of the UV, that in last years has prepared the methodology to measure quantitatively the translation rates at the genomic level (all of the cell) and at specific mRNA level.