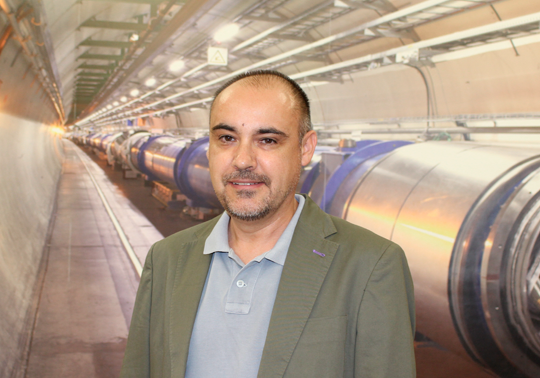 A research group of the IFIC leads a European project aimed to improve the accuracy of the theories used to search for new particles and phenomena in the Large Hadron Collider (LHC) of the CERN. In order to do so, the scientists will develop new algorithms that can be applied in other fields such as the calculation of financial risk. The budget of the project is about half a million euros during four years.

A research group of the Institute of Corpuscular Physics (IFIC, CSIC-Universidad de Valencia) leads one of the COST European projects that have been just approved in 2017. It is a project to co-ordinate the research conducted by more than half a hundred scientists of thirty institutions from eighteen countries. It is aimed to improve the accuracy of the theories used to search for new particles and phenomena in the Large Hadron Collider (LHC) of the CERN. In order to do so, they will develop both numeric and analytic algorithms that could apply in other fields like the calculation of financial risk. The project has an approximate budget of half million euros during four years.

COST is an intergovernmental association that, with the support of the European programme Horizonte 2000, promotes the transnational cooperation between researchers, engineers and doctoral students. Under the title “Unraveling new physics at the LHC through the precision frontier”, this COST Activity promoted by the researcher of IFIC Germán Rodrigo aims at improving the accuracy of the theoretical predictions that are used to find new particles and physical phenomena in the largest particle accelerator in the world. In order to find ‘new physics’, the physicists that work in LHC are based on predictions that stablish what and how they should find. These predictions are based, in turn, on the results obtained in the experiments.

In this way the Standard Model was constructed, the theory that describes the particles that form everything we see in the Universe and their interactions, one of whose fundamental ingredients is the famous Higgs boson. "Any deviation in predictions based on the Standard Model would reveal a signal of this new physics," explains Germán Rodrigo. "That's why it's important to improve the accuracy of these predictions." According to the IFIC researcher, to reduce the uncertainty of the current theoretical predictions from 10% to less than 2%, which is the objective of the project, would allow to perfect the researches in LHC.

‘There are two ways of improving the search of new physics in LHC: to increase the energy of the accelerator or to improve the accuracy of our theoretical predictions including additional quantum corrections’, says Rodrigo. Since the energy at which the LHC works is close to the limit at which it was designed (14 teraelectronvolts, TeV), which will reach from 2020, to perfect the theoretical predictions seems a necessary action to take better advantage of the LHC results in the coming years. In order to do so, the researchers that take part in this COST Activity will develop new mathematical methods and algorithms that bring the experimental results of LHC closer to the theoretical predictions that the new physics highlight.

To create new particles in accelerators, the scientists use the Einstein’s equation to transform energy into mass. ‘At the moment we have not seen any signs of new physics in the range of energy that reaches the LHC, which seems to indicate that this new physics is at an energy far above what we have expected,’ affirms the IFIC researcher. Nevertheless, if the theoretical predictions improve, the LHC data could be sensitive to new particles with mass above 10 TeV. This is what happened with the discovering of quark top: LEP, the former accelerator to LHC, was able to approximately determine its mass through its quantum effects great before than the rival accelerator, the Tevatron at Femilab (Chicago), reached the energy to product it directly.

The mathematical models and algorithms that will be developed in the framework of this COST Action would find applications in other fields such as the analysis of financial risks or the massive analytic calculation. Therefore, this project also has three industrial partners, two leader companies in the development of scientific software and a consultant of the financial sector. In the last call of the COST Actions, 454 proposals were presented and only 35 have been approved. The project led by the Institute of Corpuscular Physics is the only one selected in the field of the elemental particle physics.