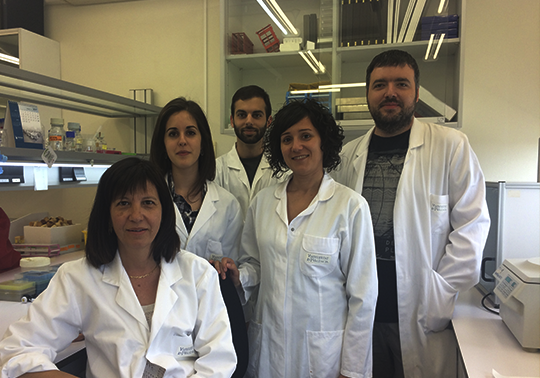 A team of the Department of Genetics and Interdisciplinary Research Structure for Biotechnology and Biomedicine of the Universitat de València has identified potential therapeutic compounds for the treatment of the Parkinson disease by employing an animal model developed in ‘Drosphila’, commonly known as the fly of fruit. The work, which has been published in the magazine Free Radical Biology and Medicine, affirms that some compounds have succeeded in increasing the motor skills and in reducing the oxidative stress that the cells suffer.

In order to conduct this study, which is led by Nuria Paricio, it was used an animal model with the Parkinson disease developed in Drosophila with a mutation in the DJ-1 gene which is associated to a variation of the disease of early onset.

The researcher team found some chemical compounds that not only improved the motor skills of the flies with that genetic alteration but also some of them were capable of reducing the oxidative stress that the cells suffer. This cause the malfunction and the neuronal degeneration in this type of diseases. These compounds are antioxidant, anti-inflammatory or neuroprotective.

The model was then copied in human cells in which the DJ-1 gene function was reduced. This cellular model allowed to ratify the therapeutic potential of some of the compounds identified in Drosophila, which were able of increasing the viability of the cells with the mutation. ‘It was proved the usefulness of Drosophila as animal model to study the Parkinson disease with the purpose of identifying potentially therapeutic compounds’, explains Nuria Paricio.

‘Our model presents several advantages since Drosophila is an easily cultivable and easy to use organisms. So, it is possible to conduct studies at a large scale in a quick and economic way. Furthermore, even though being an organism that seems to be far from the human race, it presents a great conservation of the physiological process related to the central nervous system’, as Francisco J. Sanz has said. He is pre-doctorate researcher of the Department of Genetics and the first author of the article «Identification of potential therapeutic compounds for Parkinson disease using Drosophila and human cell models».

The Parkinson disease is the second most common neurodegenerative disorder, after Alzheimer. The current treatment focuses on restoring the activity of dopamine, the main neurotransmitter, which is reduced in patients.

‘This strategy is efficient to treat the symptoms in the first stages of the disease, but it presents problems in chronic treatments. Moreover, it is unable to stop or even slow down the progression of the Parkinson disease. Therefore, it is important to find new compounds with different action mechanisms to the ones used currently and that can substitute and strengthen them’, as Verónica Muños says. She is researcher from the Department of Genetics and author of the article, too.