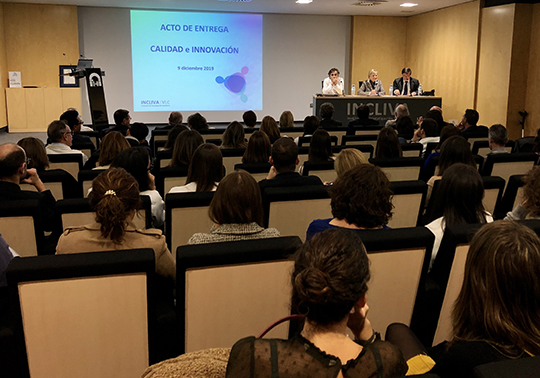 The certification of the management system of this Unit is added to those obtained by other sections of INCLIVA such as its Secretariat, its Central Research Unit UCIM, its Biobank and the management of its R+D+i.

The director of AENOR's Valencian delegation, Salvador Ibáñez, has awarded the ISO 9001 quality certificate to the INCLIVA's Phase I Clinical Trials Unit. The award was received by the Regional Councillor for Universal Health and Public Health, Ana Barceló, who in turn transferred this awards to the heads and responsible of the unit, Inmaculada Blasco and Desamparados Roda. The ceremony was attended by the Principal of the Universitat de València, Maria Vicenta Mestre.

The INCLIVA Instituto de Investigación Sanitaria (Health Research Institute) manages biomedical research at the Hospital Clínic Universitari of  València, as well as certain groups of scientific excellence at the Faculty of Medicine and Dentistry of the Universitat de València and the IGENOMIX Foundation. The Principal Maria Vicenta Mestre is patroness of the Foundation, as well as the Dean of the Faculty of Medicine and Dentistry, Francisco Javier Chorro, and the president of the Board of Trustees of the Universitat de València, Maria Emilia Adán.

The INCLIVA's Phase I Oncology Clinical Trials Unit is the first unit in the Valencian Community to receive the ISO 9001 quality certificate. ISO 9001 certification is the most internationally recognized quality standard. It is based on the continuous improvement of the processes and allows to demonstrate the commitment of an organization with the quality of service and the satisfaction of the client. With it, the organisation obtains public recognition through the audit process carried out by an independent third party, in this case AENOR, the leading certification body in Spain.

This certification reinforces the image of excellence of INCLIVA and the Hospital Clínic, as well as its commitment to excellence and quality in the management of all its activities.

Directed by Andrés Cervantes, head of the Medical Oncology Service at the Hospital Clínic of València and president of the European Society for Medical Oncology, this unit has become an international benchmark in oncology research and actively collaborates with the best hospitals in the world in cancer treatment, such as the Massachusetts General Hospital in Boston; the University of Texas MD Anderson Cancer Centre; the Vall d'Hebrón Hospital in Barcelona or the University of Colorado.

The innovative approach of this unit, which addresses cancer diagnosis and treatment from the complete sequencing of the human genome, is achieving promising results - with the use of specific inhibitors against detectable molecular alterations in sequencing processes and the development of new combinations of immunotherapy - that have allowed the development of new drugs, increasingly less toxic and more specific to each type of cancer.

Prior to the delivery of the ISO 9001 certificate, the Regional Counsellor has delivered the I INCLIVA Innovation Awards, which are born with the aim of promoting the culture of innovation in the Hospital. The head of the Clinical Analysis Service of the central laboratory, Enrique Rodríguez, has collected the first prize, endowed with €3,000, for his idea ‘Códigos QRS’ (QRS Codes) which, when read by a mobile device, links to explanatory video tutorials.

Jaime Verdú Amorós, from the Pediatric Oncohematology Pediatric Service, has received the second prize for his APP Hosly idea to improve the quality of life in patients and families; and Ana Garcés, Toni Martínez and Carolina Renovell, Nursing coordinators, have received another second prize for their idea “Vídeos explicativos” (Explanatory videos) for the hospital’s staff. Each of the second prizes is worth €1,500.

Following the award ceremony and the ISO 9001 quality certificate for the Clinical Trials Unit Phase I of Oncology, the INCLIVA Board of Trustees, chaired by the Regional Counsellor of Health, Ana Barceló, was held. The Board has approved a budget that will exceed, for the first time, 10 million euros, rising from €9,500,751 in 2019 to €10,548,539 in 2020, representing an increase of 11.03%.

It has also analysed the scientific activity and the action plans developed; it has carried out an evaluation of emerging researchers and Research Groups; and it has approved the main action proposals for 2020.

File in: Recerca, innovació i transferència