Silent concentrations at noon to protest against chauvinist violence 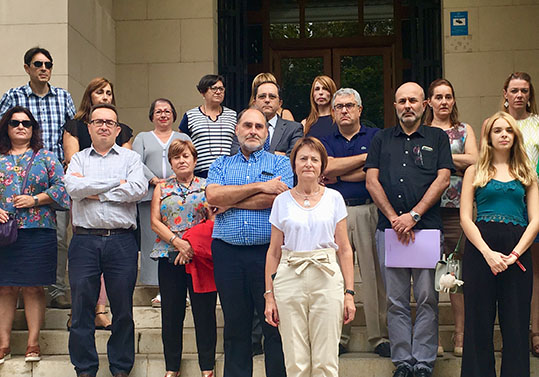 The Universitat de València joins the silent concentrations (3 minutes) organized by the Valencian Government at noon today to reject chauvinist violence, which has recently killed a woman in Borriol. The Universitat invites the university community to assemble at the gates of the University buildings.

The concentrations aim to honour all the victims, support their families and express the zero tolerance of the Universitat for chauvinist violence.

Eva Bou was murdered at the age of 35 by her couple last week. Her body was not found until the last weekend.

The Valencian government has stated: “We have suffered violence against women once again in our lands. Thus, this Government will protest on 11th September at 12 p.m. in the Palace of the Valencian Government in order to honour the victim and express public support to her family. Additionally, it will show zero tolerance for chauvinist violence and will face vigorously and symbolically the aggressor. We invite all state officials to support this silent protest by demonstrating at 12 p.m. in the gates of your workplaces with 3 minutes of silence in order to make us reflect on the fact that the injustice against women is structural and social. Therefore, all of us must fight.

These are 3 minutes of silence to shout out that we want them alive, women want to be alive. This silence will go through the walls of the neighbourhoods, the families, the friendship and towns.  Shouting that we are not accomplices of violence against women and that we won’t look away, that we are not supporting the aggressors. They have killed Eva and we want her name in the Valencian people’s memory forever. Valencians won’t permit any additional death of the patriarchy, of men that don’t understand that they are not the rulers of the women’s lives or her children. We will say this as many times as it is necessary.”