Social economy, music or mathematics on the conferences of UniSocietat on May 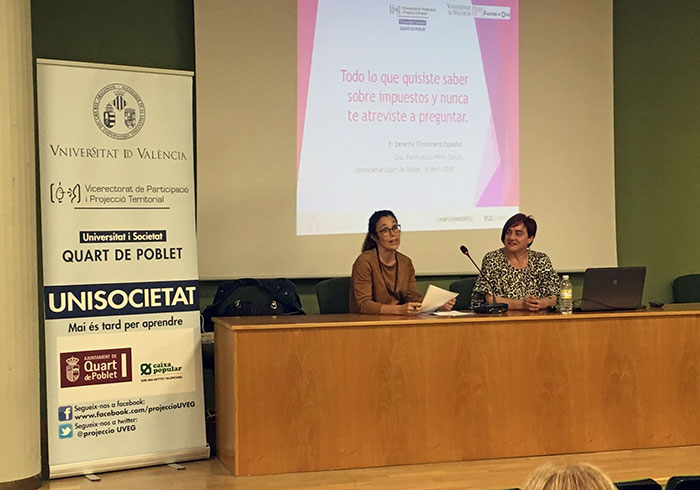 Alzira, Massamagrell, Bétera, Ontinyent, Gandia, Requena, Benetússer, Quart de Poblet, Paterna, La Eliana and Cullera receive this month presentations about numerous topics. This supplementary activity of the academic course for UNISOCIETAT is free for the rest of neighbours from de locality and the surroundings.

Ontinyent (in the headquarters of Ontinyent) and Banco Santander (in Gandía).

These multidisciplinary lectures given by teachers of the University are an example of the wide range of disciplines and scientific fields of the University of Valencia. “It is a form to transfer knowledge to the society, to complement the formation of the students of Unisocietat and to motivate the citizenship to join in this university programme. This programme count on the presence of more than 1500 students distributed among their eleven headquarters in the present course 2017-2018.

Eleven conferences in the territory during the month of May

The first conference of the month will be this Wednesday 2. The City Hall of Benetússer (Horta Sud) will host the presentation of Rafael Crespo (Department of Mathematical Analysis) Mathematics to be bought well. A look at the world of publicity

On 10 May, Caixa Ontinyent Cultural Centre (Vall d’Albaida) will receive the professors María Jesús Perales and Jean Rwiyamilira (Research Methods and Diagnosis on Education), that will offer the lecture Music and Interculturalism: bring us closer to África.

On 15 May, the House of Culture of Alzira (Ribera Alta) will be the scene of the conference of Teresa Savall (Applied Economics), who will speak about Agroecology and consumption groups. Reinventing social economty.

Wednesday, 16 May will be on Gandia (Safor), Quart de Poblet (Horta Sud) and Bétera (Camp de Túria). The neurologist Gema Mas and the neuropsychologist Carmen Alabort will be in the International Centre of Gandia, where will deal the Disorders of impulse control in the parkinson’s disease. The professor Hortensia Rico (Microbiology and Ecology) will be in the House of Culture of Quart de Poblet, where will give the lecuture House Microorganism. The same day, neighbours of Bétera and surroundings can assist to the lecture Way between Saguntum, Valentia y Edeta: the Roman town of l’Horta Vella in Bétera, that will take place in the Bétera Castel by the professor José Luis Jiménez (Prehistory, Archaeology and Ancient History).

On Thursday 17 will be the turn of Requena (Meseta Utiel-Requena) and Massamagrell (Horta Nord). Paz Lloria (Criminal Law) will be at the Cultural Space Feliciano Antonio Yeves of Requena, where will speak about The cybercrime. The Massamagrell Cultural Centre will receive Gabriel Terol (Language Theory and Communication Sciences), who will expose East and West: a curious relationship.

Tuesday 22 May, the professor Isabel Rodríguez (Social Psychology) will present the lecture The stress: enemy or ally in the Local Auditorium of Cullera (Ribera Baixa).

On 24 May, in the Social Centre Campamento of Paterna (Horta Nord), will take place the conference Active aging: how to live for aging better​, by the professor José Viña (Physiology).