The Spanish section of ELSA, the European Law Students’ Association, celebrates in Valencia the 30th anniversary of its foundation by students of the University 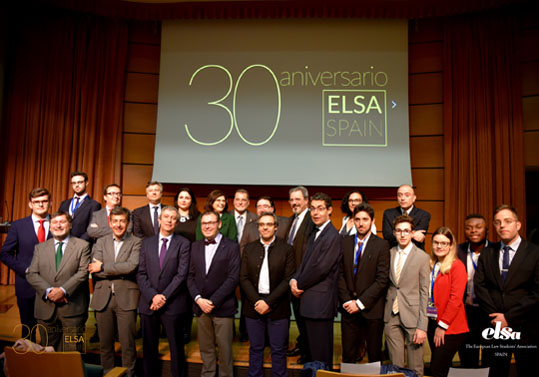 The University of Valencia hosted the celebration of the 30th anniversary of the Spanish group in the European Law Students’ Association (ELSA) within the framework of the national congress of the organization, from 5th to 8th April, carried out in Cullera. The occasion has brought together a hundred law students, representatives of ELSA groups in almost twenty Spanish universities, with a dozen founding members of ELSA in Spain, all of them students of the University de Valencia in 1988.

By delegation of the Rector, the event was chaired by one of these founding members, the Vice-rector for Internationalization and Cooperation, Guillermo Palao, accompanied at the table by the Dean of the Faculty of Law Javier Palao, the Students’ Delegate Jordi Caparrós, the president of the federation ELSA-Spain Patricia Costas and the president of the local group in the UV Lamberto Albelda.

On behalf of the founding members, today professors and legal professionals, the lawyer Ana Falomir, the first president of the national group, addressed the new generation of young lawyers stressing that “even then in ELSA there was no glass ceiling and I am glad that at this time either”. Also, the current Vice-manager of the University, José Ramírez, has told about the experience concerning the first magazine of the association in Spain. Also outstanding were the founding members who could not be present, especially César Valor, a senior official of the European Union, and Elizabeth Torrecillas, a partner in the Uría law firm.

Thanks to Andrés Goerlich, Honorary Consul of Hungary in the Comunitat Valenciana, and Carlos Flores, Professor of Constitutional Law of the UV, during the event it was recalled that the first trips and exchanges of Spanish students within the framework of ELSA were realized with students from Hungary and thanks to ELSA the two Europes of that time came close considerably, at least as far as the fractures between the jurists are concerned.

The solemnity has also counted on the parliaments of Jacobo Jordens, an historical exponent of ELSA in Valencia, and the Valencian lawyer Jesús López Pelaz, founder of ELSA in Castilla y León.

“The association of representation usually we make noise, but there are also other entities, such as ELSA, which provide content to the university and, while not making much noise, constitute a different way of working",- acknowledged the representative of the presidency of the General Assembly of Students of the UV Benjamín Velasco.

The event took place in the University Botanical Garden and was preceded by a conference for the participants of the congress on Environmental Law, by Prof. Albert Ituren. Precisely, the crimes against the Environment, together with gender violence and Human Rights, were the subjects of the first academic activities of the Spanish ELSA group, within the University of Valencia.

Two of the speakers of these first activities also made their greetings to the assembled. Thus, Antonio Vercher, Supreme Court’s Prosecutor on the Environment and Urbanism, wanted to make clear his “pride and satisfaction to see that that the small flame lit by ELSA, which was barely glimpsed 30 years ago, has grown and, being highly representative, continues in the gap illuminated many professionals and students who, after all, are the best guarantee of good work and effectiveness in many fields and areas, but especially in the environment”. For José Mª Tomás y Tío, President of Section at the Provincial Court of Valencia and President of the Foundation for Justice –who has highlighted to the members of ELSA the “impulse of the companions, friends and professors who continue among us”– it is clear that “the exercise of any profession founded on law and reason necessarily leads us to discover the importance of the rights of others, who make us messengers of justice”.

ELSA València-UV –the dean entity of the ELSA groups in Spain– has counted for the organization of this event with the support of the Vice-rectorship of Internationalization and Cooperation, the Faculty of Law and the Service of Dynamization and Information of the Students of the University, as well as the Tourism Valencia Convention Bureau Foundation, among others. 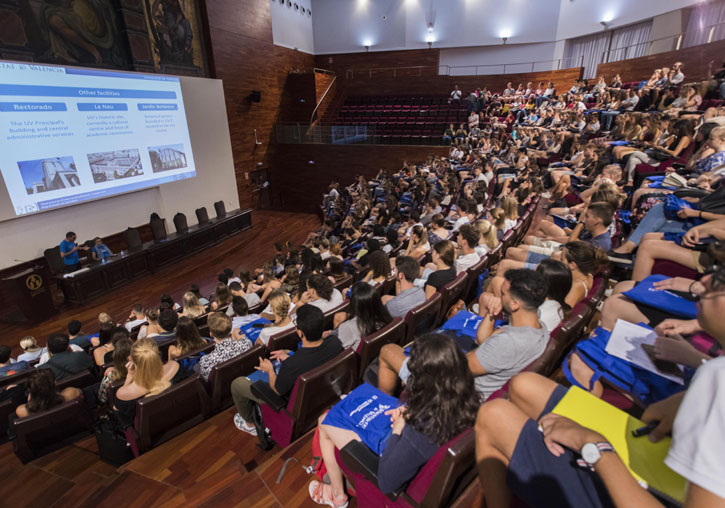