Team sports pick the CADU league up with the Valencian derby 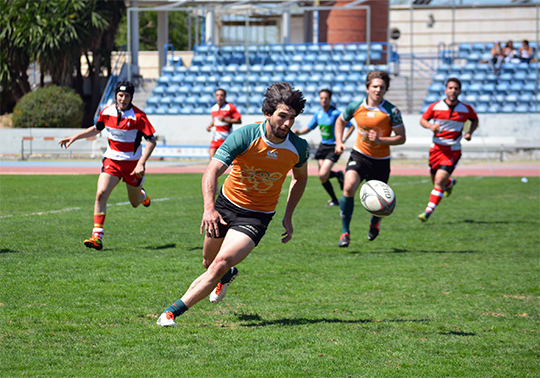 The UV teams pit their skills against the Universitat Politècnica of València (UPV) on Thursday 9 February in the new edition of the Regional University Sports Championship (CADU) for team sports after a break due to the exam period.

On this occasion, the derby started at 13:00 at the Universitat de València facilities with the five-a-side male team which will blow the starting whistle from the University Sports Pavilion to one of the most eagerly awaited sessions of the competition. The team headed by Javier Arnau competes for the final against the Politècnica. “If we win we will be mathematically classified for the final, which is our first aim since we started the year. For us it is a derby because we have known each other for many years and there is an important sporty rivalry. We confront the match with great desire and ambition. The team knows that it is an important match and we are training to arrive at the appointment in good shape”, argues the technical. In relation to the team, Arnau hopes “to have all the players we have available; for the technical staff is a luxury to have the option of discarding in the meeting because all the players want to play the match”.

The male football players will follow them at 13:30 at the Football field of the Tarongers Campus.

On the other hand, the Aulari V Nord will receive the basketball teams. At 14:00 will play the female team and at 16:00 will play the male team. José Manuel Casares, selector of the male team, thinks that “the rival will be a tough competitor; we are looking forward to measuring ourselves with them. The team faces the match against the UPV with the ambition of continuing undefeated, sealing their ticket to the final of the CADU, without ignoring the difficulty of the match because the UPV arrives also undefeated to the match”.

Simultaneously, the girls of the female five-a-side will play their match at 15:00 in the University Sports Pavilion. Ángel Zurilla’s girs “face the session with excitement”, but they have to pay attention to the results of the other matches “in case the results are favourable and winning the two sessions we have left, we can get into the final. It is going to be a complicated match, since the team is new, we are having trouble adapting and the Universitat Politècnica always presents difficult matches”.

As visitants, the teams of the Universitat de València played all the meetings in the Sports Pavillion of the Universitat Politècnica de València. The girls of the female handball team will inaugurate the session at 14:00, and at 16:00 their partners of the male team will play. The female handball team, led by Sagrario Santana, is preparing for a “complicated match, not only because of the rival itself (UPV), but also because it is the return to the competition after the break; besides the responsibility of knowing that getting these two points can put us in the final”, she points out. For the selector, it is primordial to “maintain a high defensive level to leave the rival with few goals, easing our attack. To know how to control the match’s rhythm without risking with it is not necessary”. Regarding the team, Santana points out that the players “are excited to get back to the competition and are motivated to achieve the goal”.

For its part, Juan Ángel Perdigón, selector of the male team, forecasts a match “of great rivalry”, given the circumstances. “We reach the fourth session of the competition with a small chance of classifying for the regional finals, with the eyes set to the rest of matches that are being played and hoping the bad streak we had with lesions during this period will not take its toll”, explains.

The entrance to the whole session is free and represents a unique opportunity to see some of the best Valencian university teams in action.

The Physical Education and Sports Service offers live coverage and monitoring of the team through its social networks (Twitter: @sefuv and www.facebook.com/SEFUV).

The paddle and tennis teams, at the gates of the final round
“We are one step away from the final round”. Those were the words of the selectors of the tennis and paddle teams of the Universitat de València, Amparo Llópez and Jorge Bellmont, respectively, after competing against the University of Alacant the third session of the League of the Regional University Sports Championship (CADU).

And they were right. The landslide victory of the padel team in all three modalities –mixed, female individual and male individual– and the two first positions for the tennis team in male individual and mixed make them play on next Thursday 9 the fourth session of the regional league against the Universitat Politècnica de València.

“Today’s (by yesterday) result is very good, after winning the matches against the Catholic University of Valencia and the Miguel Hernández of Elche. We continue unbeaten, so we are ready to play the final phase of the CADU and therefore classify for the Spanish University Championships”, pointed Llópez.

The tennis mixed fell against Raúl Gil and Beatriz Córcoles, while Pedro Lizondo won in the male individual category. The tennis female player, Paula Álvarez, was not that lucky and lost against her opponent from Alacant.

Bellmont, for his part, celebrated the great Valencian victory. It is the second time the padel team of the Universitat adds this League to its credit, and points towards a new triumph on 9 March at the Politècnica. “Winning today was vital for us after the last draw against the Catholic, and even more with the 3-0, which has opened us the doors to the CADU final”, he said.

Clearly, the results of the team coached by Jorge Bellmont left no room for doubt. His six athletes played and won.  The male pair, formed by Javier Rodríguez and Javier Rico, ended with two excellent 6-1 and 6-3; the female pair, Elena Molina and Tamara Icardo, finished with an even more generous score: 6-1, 6-0; and the mixed, with Javier Santonja and Fátima Olaso, with a bit tighter results but winners anyway: 7-6, 7-5