The Universitat de València will offer 8,635 first-year places for the undergraduate studies in the academic year 2017/2018 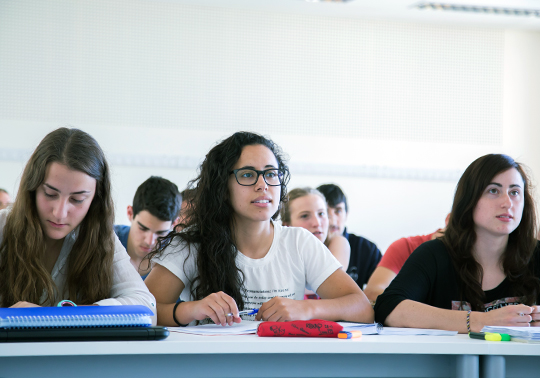 The Governing Council has approved the offer of first-year places for undergraduate studies in the 2017-2018 academic year. They will be 8,635 places, 65 more than in the current academic year, which correspond to the Degree in Nursing in the Ontinyent Campus (still pending of verification.) The classes will start on Monday 11 September. It has also been approved the elections calling in order to renew completely University Senate which will take place next November.

The offered places for the next academic year are distributed in 55 Degrees and 5 Double Degrees. There will also be 370 places for Degrees in the affiliated centres (La Fe School of Nursing, Florida and EDEM.) The Vice-principal for Undergraduate Studies and Language Policy, Isabel Vázquez, has explained that apart from Nursing in Ontinyent, the only modification is that the Double Degree in Sociology and Political Sciences is offered with 40 places. These places come from the Degree in Sociology (-25) and the Degree in Political Sciences (-15).

The Centre who offers the biggest amount of places is once again the Faculty of Economics. It will offer 1,090 places for its five Degrees apart from 60 for a Double Degree.

The distribution of the places by degrees can be consulted cliking here.

The Governing Council has approved the joining of the Universitat de València to the Bill of the Spanish universities in favour of the fair trade and the responsible trade. The Vice-Principal for International Relations and Cooperation, Guillermo Palao, has presented the document. Members of the governing council such as Amat Sánchez and Carles Xavier López have expressed their support and have insisted on the fact that fair trade does not refer to distant situations but that it should be carried out day-to-day here through a responsible hiring that respects the rights of people.

The complete bill can be checked clicking here.

The Vice principal for Participation and Territorial Projection, Jorge Hermosilla, has presented the report on the Suggestions, Complaints and Compliments Mailbox of the University corresponding to the academic year 2015/2016. According to the document, in that academic year there was a thousand of demands, among which 771 were admitted and processed. The 76% of these were complaints and the rest were suggestions and compliments in equal parts.

In his report, the Principal has conveyed his institutional condolences on the recent death of two members of the university community. These two members are the Chemistry student Ernesto Guerrero, and the professor from the Department of Sociology Manuel Mejías de la Fuente.