The University celebrates the International Day of Women and Girls in Science by highlighting the role of women in science popularisation.

The University of Valencia joins, one more year, the 11th of February commemoration, an initiative that aims for a greater participation and progress of women and girls in science. The 11th of February was declared in 2015 as International Day by the General Assembly of the United Nations. This year the University will present an extensive agenda and hold an official ceremony to mark the importance of promoting the full and equal participation of women and girls in science education, training, occupation and decision-making processes.

‘The role of women in science popularisation’ is the title of the round table that covers the official ceremony scheduled for 11 February at 16:30 pm in virtual format, for which previous registration is required:

The event will feature speeches by female experts in science popularisation and activists in social networks, as the following: Sara Robisco Cavite, computer engineer and expert in artificial intelligence and software engineering (La Enzima Inquieta-@SaraRc83); Ester Sánchez García, science communicator (Impacientífica-@impacientifica) and Ana Isabel Salvador Junco, PhD in Theoretical Physics and science populariser as well. The event will also feature Silvia Ruenda Pascual, director of the Department of Computer Sscience at the University of Valencia and of the GVA-UV Chair for Digital Gender Gap and Anabel Forte Deltell, statistics researcher and lecturer at the University of Valencia. More info: http://www.uv.es/igualtat

The University of Valencia thus joins the 11 February initiative that aims to eliminate all kinds of discrimination against women and girls through policies and curricula in the field of science that encourage greater participation and recognise their contributions. As every year, several activities have been scheduled but this time most of them in online format due to the Covid-19 restrictions.

Thus, a new Women in Neuroscience Conference https://donesineuro.blogs.uv.es/ will take place. It is organised by a group of women from the Faculty of Medicine who are also members the Group of Women in Neuroscience of the Spanish Neuroscience Society. During the conference they will discuss the reason of this celebration and will present researches carried out by female neuroscientists as well as those carried with a gender perspective.

On the same 11 February, a talk on 'The Matildas: the great forgotten women of the history of science' will also be given in collaboration with the Erasmus Student Network (ESN) as part of the University of Valencia's bioApS project.

It will be given by Alba Ripollés, Teresa Nebot and Claudia Pérez, participants in the xarradAps initiative (http://xarradaps.uv.es/). The event will start at 6 p.m. and will also be online. Previous registration is required at: https://forms.gle/dXEomFpppiMej6JB6.

As in previous years, several talks have been scheduled in high schools with the participation of students from the University of Valencia and participants in the SWI project http://www.smallworldinitiative.org/. These are part of the '11 February' initiative, and are coordinated by Sergi Maicas, lecturer in the Department of Microbiology. It is a project aimed at the educational community that began at Yale University in 2013 to bring scientific culture and biomedical research to the pre-university level. It uses a crowdsourcing strategy aimed at discovering new antibiotic-producing microorganisms for infectious diseases.

In our case, it is students from the University of Valencia who give this training and therefore the objective is twofold, both for the scientific interest of the proposal and to motivate secondary school students to pursue STEM (Science, Technology, Engineering and Mathematics) degrees.

Finally, the Botanical Garden will present the usual series ‘Women and Science at the Botanic Garden’, now in its fourth edition and this year in a virtual format. More info: http://www.jardibotanic.org/

Around 11 February, the programme of activities will be presented. It will involve the launch of a motivational video aimed at girls and young women interested in science with quotes from the 12 women scientists who have taken part in the three previous editions of 'Women and Science'.

Specifically, on 18 February, there will be a round table on women and science popularisation projects. The speakers will be Silvia Rueda (Girls4STEM), Clara Grima (Scientific women: past, present & future), Victoria del Toro (No more Matildas), Anabel Morales (Remembering Lise Meitner) and Laura Morron (A hombros de gigantas).

The University of Valencia, in compliance with the Equality Plan, develops a culture of equality and is committed to consolidate its trademark as an egalitarian University. Scheduling conferences, debates and awareness-raising activities on special dates such as the International Days of 8 March, 25 November and 11 February is one of the commitments and actions to be carried out in the deployment of the Equality Policies. 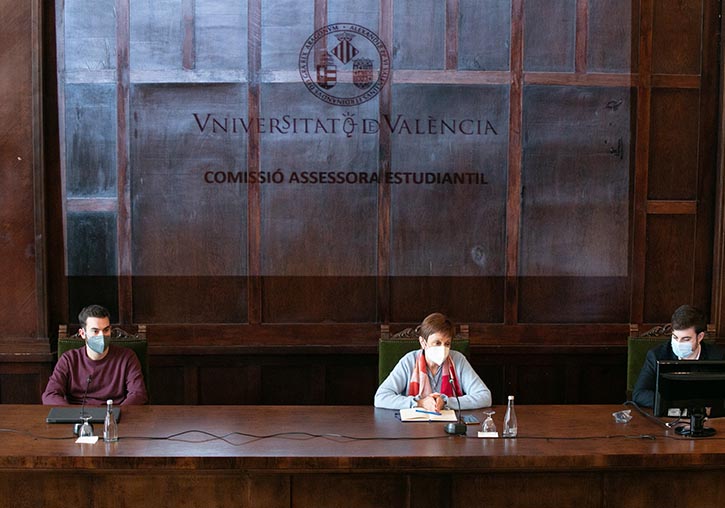