Tourism, physics or empathy, among the themes of the Unisocietat conferences of December 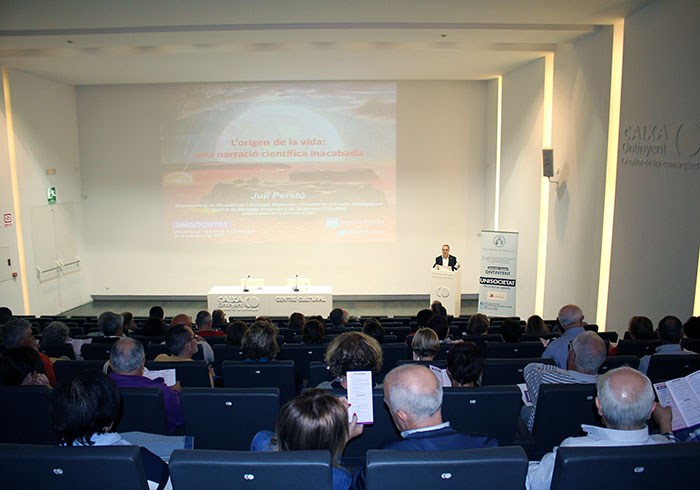 The director of the Ontinyent Campus, José Cantó, presented the lecturer Juli Peretó in Ontinyent. 29/10/2017

The programme of conferences has the purpose of complementing the academic year of Unisocietat, besides, it is free entry and open to the rest of citizens of the towns and their territorial environment. This December, Benetússer, Cullera, Quart de Poblet, Massamagrell, La Eliana, Ontinyent, Paterna, Requena, Alzira and Bétera will host the last talks of this vocational education and training organised by the Office of the Vice-Principal for Territorial Projection and Participation.

The first conference will take place on Tuesday 12 December in the Cultural Centre of Alzira (Ribera Alta), where the professor of the Department of Psychobiology, Luis Moya, will give the talk The empathy: understanding it to understand the others.

On Wednesday 13 December, the series of conferences arrives in Benetússer (Horta Sud), la Eliana and Bétera (Camp de Turia.) Physics in jeans is the title of the talk which will be given by Roberto Pedrós (Earth Physics and Thermodynamics) at the City Council of Benetússer. Training Centre of Adult People of L’Eliana will be the stage of the presentation Learning how to count on the Indo-Europeans, which will be given by Carles Padilla (Classical languages) Lastly, Professor Amparo Oliver (Department of Behavioural Sciences Methodology) will address the theme of lifelong learning at the Bétera Castle.

On Thursday 14 December it will be the turn of the conferences of Ontinyent (Vall d’Albaida), Paterna and Massamagrell (Horta Nord). The Cultural Centre of Caixa Ontinyent will welcome professor Enrique Lanuza (Cellular Biology, Functional Biology and Anthropology), who will give the presentaion Sex, drugs and neurons. The conference Sexual selection: love or interest in the choice of a partner? offered by Emilio Barba (Microbiology and Ecology) will take place at the Social Centre of campament of Paterna. The attendees will be able to learn the keys to sensory marketing from the hand of Professor Walesska Schlesinger (Marketing and Market Research) at the Cultural Centre of Massamagrell.

Cullera (Ribera Baixa) will attend the conference The tourism: elements to delight tourists in a sun and beach destination by Professor Amparo Cervera (Marketing and Research of Markets) on Tuesday 19 December, at the Auditorium of the market.

The last conference of December will be held in Requena (Meseta de Requena-Utiel) on 21 December in the Cultural Centre Feliciano Antonio Yeves. Under the title of My name is gladiator. The world of gladiator in the cinema, the professor Antonio C. Ledo (Prehistory, Archaeology and Ancient History) will share his reflections on history and cinema with the audience.

The series of Unisocietat conferences, which will continue monthly throughout this academic year until June, has been organised by the Vice-Principal for Territorial Projection and Participation, with the collaboration of the local governments of Ontinyent, Quart de Poblet, Cullera, la Eliana, Gandia, Massamagrell, Alzira, Paterna and Requena, and the financial support of Caixa Popular (in nine headquarters), Caixa Ontinyent (in la Vall d’Albaida) and Santander (in Gandía.) Its purpose is to complement academic courses of the ‘Unisocietat’ programme, which bring together more than 1.500 students enrolled in 2017-2018.