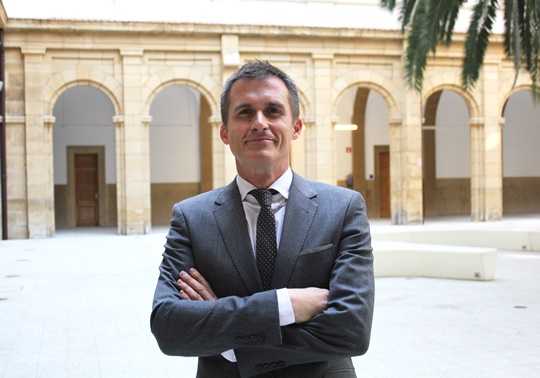 La Nau Cultural Centre of the University of Valencia will host on Tuesday October 23 at 7 pm the conference ‘Evolution of the Human Right to Science’ by Mikel Mancisidor, member of the Committee on Economic, Social and Cultural Rights of the UN. The paper is part of the ‘Moving Rights’ cycle, organised on the occasion of the 70th anniversary of the Universal Declaration of Human Rights and which deals with the situation of these freedoms at present

Mikel Mancisidor is a member of the UN Committee on Economic, Social and Cultural Rights for the period 2013-2020, assistant professor of International Human Rights Law at the Washington College of Law (since 2015) and a doctorate in International Relations for the Diplomatic School of Geneva. He also chairs the International Institute for the Human Right to Science.

The human right to science is a right already contemplated in the 1948 Universal Declaration of Human Rights and the International Covenant on Economic, Social and Cultural Rights of 1966. In Ibero-America it is previously recognised in the Charter of the Organization of American States and in the American Declaration of Human Rights and Duties. According to Mancisidor, in the Yearbook of Human Rights, this is a right that belongs to the so-called economic, social and cultural rights group (ESCR) and includes aspects of participation, access rights and international cooperation.

However, despite the fact that in the last few years there has been a significant role in the legislative development of DESC rights, “the same thing has not happened with regard to the right to science”. In his Tuesday conference, the expert will analyse the situation in which the human right to science is found. According to Mancisidor, this “must serve as a guide for the states, but it must also provide elements to scientific organisations, research personnel and civil society in general to better understand their rights and responsibilities”.

Besides, Mikel Mancisidor is Rapporteur for the General Observation on Science and Human Rights, Gold Medal of Human Rights 2013 of the Spanish League Pro-Human Rights and ex-Director of UNESCO Etxea - UNESCO Center of the Basque Country (2004 -2014).

The Movement Rights cycle is organised by the Office of the Vice President for Culture and Sports, the Ministry of Justice, Public Administration, Democratic Reforms and Public Liberties, the History and Democratic Memory Room, and the Scientific Culture and Innovation Unit of the University of Valencia on the occasion of the 70th anniversary of the Universal Declaration of Human Rights.

The European School of Thought Lluís Vives is a cultural project, promoted by the Vice President for Culture and Sports of the University of Valencia, with the management of the General Foundation of that academic institution, which is configured as a space for reflection and the participatory and critical debate on current affairs. The School also has the participation of other actors of the public administration and civil society: Presidency of the Valencian Government; Valencia Town Hall; Regional Ministry of Transparency; Regional Ministry of Education, Research, Culture and Sports; Valencian Academy of the Language; Alfons el Magnànim Institute; European School of Humanities and Popular Savings Bank.