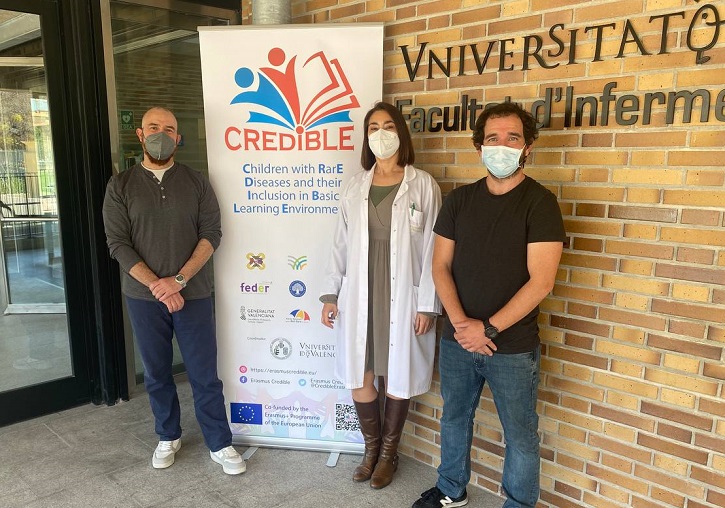 The University of Valencia coordinates the European project ‘Children with rare diseases and their inclusion in basic learning environments’ (CREDIBLE), which proposes a platform for the exchange of experiences with which to alleviate the deficiencies observed in the inclusion of children with rare diseases. The proposal, led by Professor Óscar Lozano, from the Faculty of Teacher Training, includes the participation of companies, associations and universities from Greece, Latvia, the United Kingdom, Romania and Spain.

In addition, two researchers from the Faculty of Nursing and Podiatry of the University of Valencia, Rosa Fonfría and Pablo García-Molina also participate in CREDIBLE. The project will end on August 31, 2022 and the budget is 244,409 euros.

A rare disease is one that affects a small percentage of the population and that also involves the personal and family environment of the person diagnosed, and the entire society. Most are genetic and are present throughout a person’s life, even if symptoms do not appear immediately. In Europe, a disease or disorder is considered rare when it affects one in every 2,000 people and the patient represents 6 to 8% of the EU population, more than 30 million.

According to Óscar Lozano, these diseases imply a high degree of social and professional ignorance, the absence in many cases of a clear diagnosis and effective treatment and the lack of specific care and help. “Children with rare diseases are a particularly vulnerable group in education. This is the reason why it is necessary to recognise and guarantee the rights of children and people with rare diseases: tolerance, respect, non-discrimination, equal opportunities and value. of the differences. Educatively speaking, a ‘real’ educational inclusion”, highlighted the professor of the Department of Didactics of Experimental and Social Sciences.

Among other objectives to ensure that the school stage can integrate and empower children with rare diseases to project them towards a better social and work future, CREDIBLE aims to train teachers, exchange information and experiences, together with a coordinated intervention with parents’ associations.

Among other recent activities, in Totana (Murcia), the VI Educational Congress on Rare Diseases has been held this Friday, April 30, inaugurated by the Queen of Spain Letizia Ortiz and organised by the Federation of Rare Diseases (FEDER), also part of the CREDIBLE project. The event was held on World Undiagnosed Rare Disease Day.

Information about the project: https://erasmuscredible.eu/